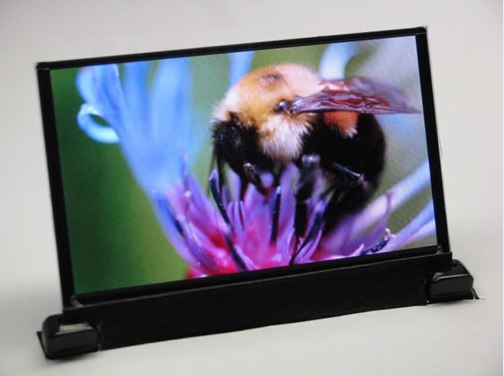 DuPont has developed a printing process to bring down the cost of high-performance displays.

Organic light emitting diode, or OLED, displays seem to have it all: energy efficiency and a beautiful, crisp picture that refreshes rapidly. But it's difficult to make them on a large scale, so OLED televisions remain very expensive. Last week, DuPont Displays announced the development of a manufacturing process that the company says can be used to print large, high-performance OLED televisions at volumes that should bring down costs. Using a custom-made printer from Japanese manufacturer Dainippon Screen, DuPont says it can print a 50 inch-television in under two minutes, and testing of the displays shows their performance is reliable--the displays should last 15 years.

Display makers have struggled to scale up the manufacturing of OLEDs while maintaining high performance and low costs. "The key question is, when you scale up, does the cost per square inch drop or go up?" says William Feehery, president of DuPont Displays.

OLEDs on the market today rely on an expensive, small-scale technique called shadow-mask evaporation to pattern the light-emitting organic molecules that make up the pixels in these displays. LG's 15-inch OLED television, the biggest on the market, is set to come out in the United States this year at a cost of $2,725. At these prices, OLEDs can't compete with liquid-crystal displays (LCDs), which are relatively inexpensive because manufacturers can make them at large volumes.

One of the most promising alternatives to shadow-mask deposition is printing, which is compatible with manufacturing large screens. But printing is difficult to do reliably, and the resulting devices have lagged behind the performance and durability of those made using conventional techniques. It's been a major materials challenge to develop inks that won't bleed during the printing process, that have the desired electrical and optical properties, and that don't deteriorate over time.

OLED displays are made up of 12 to 15 layers of materials. In each pixel the red, green, and blue light-emitting materials are positioned side by side and sandwiched between materials that bring electrical current in and out of the device and that allow light to leave it. When these layers blend together during printing, device performance suffers.

DuPont has addressed this problem by using active molecules in the inks used to print each layer that are insoluble in the inks used to print the adjacent layers. This is more complex than it may sound, says Feehery. "Each of these materials is a major development effort on its own, and having to tie it to the ones above and below it imposes a lot of constraints," he says.

The company worked with Dainippon Screen to develop a multi-nozzle printer for the new inks. "The Dainippon printer works like a garden hose," says Feehery. It generates a continuous stream of ink, rather than droplets, and moves over a surface at rates of four to five meters per second while patterning a display. DuPont says that its red, green, and blue OLED materials can make displays that will last 15 years. (Reliability over time has been a concern for printed OLEDs.)
DuPont can print a 50-inch OLED TV in two minutes, you'll be waiting a little longer

The Complex Global Supply Chain Of Semiconductors Explained In One Chart