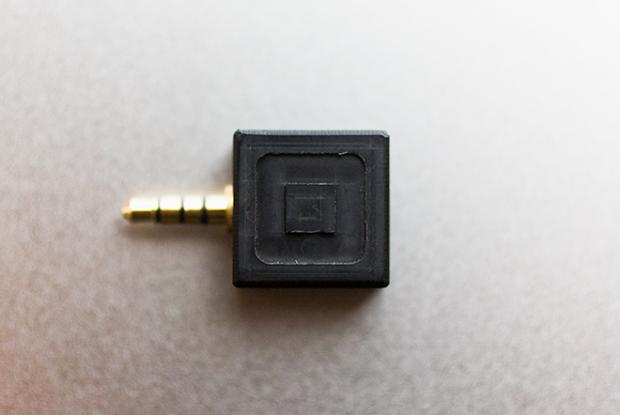 Did your Girl Scout cookie sales drive flop because nobody carries cash anymore? If so, you may need to get Square, the mobile payment solution from Twitter founder Jack Dorsey that allows anyone with an iPhone to take plastic.

Square, which launched Tuesday with iPhone and Android support, is a small, plastic cube about the size of two Chiclets. From its bottom side an audio connector plugs into the headphone port on your phone. A slot in the cube lets you pass a credit card through. When you do, a reader converts the data from the magnetic strip into an audio signal and passes it on to software on the phone.

Wired got its hands on a test unit earlier this year and put it through the paces. Based on our early look, Square appears to be a great option to let anyone with something to sell accept credit cards as payment.

And it will accept just about any type of general credit card, including Visa, Master Card and American Express. They're also working on Discover and even Diner's Club in the event you need to conduct business in the 1970s.

Currently, the hardware and required account are both free. While most point of sale systems charge merchants variable fees based on the card used, Square will charge a flat rate for all cards. Pricing was in flux during the beta period, but has since been fixed at 2.75% of each transaction, plus 15 cents, if the card is physically swiped through the Square reader. For "card not present" transactions, the fee is 3.5% plus 15 cents. Both are significantly lower than typical merchant fees charged by credit card-issuing banks.

Square's software is quite well-designed. You must have an internet connection to run it, but the good news (especially for AT&T customers) is that it will work using Wi-Fi.

As soon as you've entered the card number, the transaction is authorized, and a new screen lets the purchaser "sign" their name using the iPhone's touchscreen. Finally, the app gives the purchaser an option to have the transaction receipt e-mailed, and it e-mails the vendor as well. The process is all very smooth and takes less than a minute, including e-mail entry. Money shows up in your bank account one to two days after the transaction.

But just as nice as the user interface is the backend for vendors, which shows the amount of the transaction, the associated fees and the net amount to be deposited into checking accounts. There's also a button to completely refund the transaction, including all fees. However, during the beta at least, these refunds had to be manually processed by Square. The company noted it planned to have this system automated when it emerged from beta.

One option we did not get to test, although it should be forthcoming, is payer verification. Square will let payers create accounts tied to a credit card, and upload a head shot. When a merchant swipes a card that's associated with a Square payer's account, the app will display the payer's head shot and ask for verification that it's the person making the transaction. The demo we saw of this was exceptionally slick.

Currently, Square has an app for the iPhone (and iPod Touch or iPad, of course), as well as an Android version. Dorsey envisions a time when Square could work with just about any device with an audio port that can run software, including laptops.

Overall, we were highly impressed with Square. It was actually fun to use, enough so that it made us want to run up thousands of dollars in credit card bills just to try it out.

WIRED Turns any monkey with an iPhone into a 21st-century seller. Tiny cube fits easily into coin pocket of jeans. Durable: We were able to apply most of our body weight in pressure (don't ask) without snapping off the jack. Slick software with excellent UI gives good data. Ability to map purchases helps mobile merchants find sweet spots. Eliminates need for high-dollar merchant accounts.

TIRED Somewhat difficult to seat properly in headphone jack. No way currently to add payer profiles to system. We are all mere cogs in Visa's great machine of revolving debt, spinning endlessly yet going nowhere.