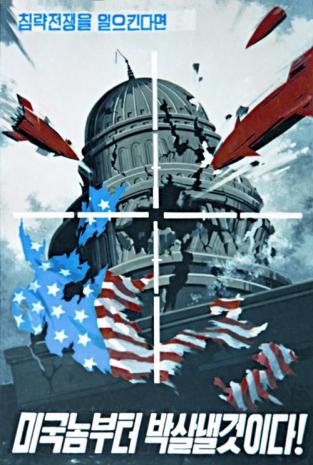 A grim report circulating in the Kremlin today written by Russia’s Northern Fleet is reporting that the United States has ordered a complete media blackout over North Korea’s torpedoing of the giant Deepwater Horizon oil platform owned by the World’s largest offshore drilling contractor Transocean that was built and financed by South Korea’s Hyundai Heavy Industries Co. Ltd., that has caused great loss of life, untold billions in economic damage to the South Korean economy, and an environmental catastrophe to the United States.

Most important to understand about this latest attack by North Korea against its South Korean enemy is that under the existing “laws of war” it was a permissible action as they remain in a state of war against each other due to South Korea’s refusal to sign the 1953 Armistice ending the Korean War.

To the attack itself, these reports continue, the North Korean “cargo vessel” Dai Hong Dan believed to be staffed by 17th Sniper Corps “suicide” troops left Cuba’s Empresa Terminales Mambisas de La Habana (Port of Havana) on April 18th whereupon it “severely deviated” from its intended course for Venezuela’s Puerto Cabello bringing it to within 209 kilometers (130 miles) of the Deepwater Horizon oil platform which was located 80 kilometers (50 miles) off the coast of the US State of Louisiana where it launched an SSC Sang-o Class Mini Submarine (Yugo class) estimated to have an operational range of 321 kilometers (200 miles).

On the night of April 20th the North Korean Mini Submarine manned by these “suicidal” 17th Sniper Corps soldiers attacked the Deepwater Horizon with what are believed to be 2 incendiary torpedoes causing a massive explosion and resulting in 11 workers on this giant oil rig being killed outright.  Barely 48 hours later, on April 22nd , this North Korean Mini Submarine committed its final atrocity by exploding itself directly beneath the Deepwater Horizon causing this $1 Billion oil rig to sink beneath the seas and marking 2010’s celebration of Earth Day with one of the largest environmental catastrophes our World has ever seen.

To the reason for North Korea attacking the Deepwater Horizon, these reports say, was to present US President Obama with an “impossible dilemma” prior to the opening of the United Nations Review Conference of the Parties to the Treat on the Non-Proliferation of Nuclear Weapons (NPT) set to begin May 3rd in New York.

This “impossible dilemma” facing Obama is indeed real as the decision he is faced with is either to allow the continuation of this massive oil leak catastrophe to continue for months, or immediately stop it by the only known and proven means possible, the detonation of a thermonuclear device.

Thank you to the Office of Strategic Influence for this informative report!

"However , information intended for foreign audiences, including public diplomacy and PSYOP, increasingly is consumed by our domestic audience and vice-versa."

"PSYOP messages disseminated to any audience except individual decision-markers (and perhaps even then) will often be replaued by the news media for much larger audiences, including the American public."

Freedomsphoenix has hit rock bottom in credibility by distributing a Faal hoax. No body with any credibility falls for Faal's twisted lies.

Thank you to the Office of Strategic Influence for this informative report!

"However , information intended for foreign audiences, including public diplomacy and PSYOP, increasingly is consumed by our domestic audience and vice-versa."

"PSYOP messages disseminated to any audience except individual decision-markers (and perhaps even then) will often be replaued by the news media for much larger audiences, including the American public."