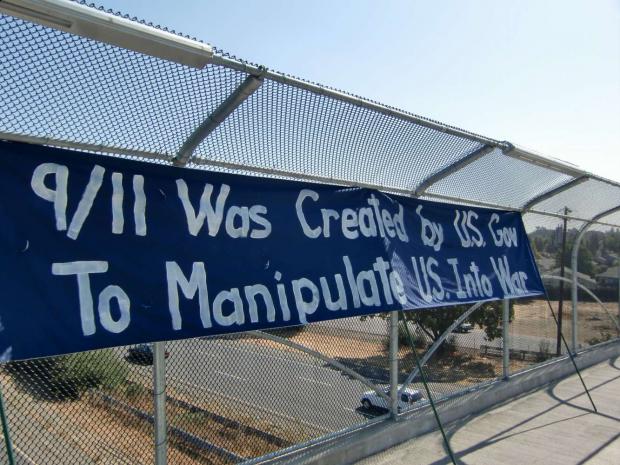 Freeway blogging is a way for citizens to be the media. We make a large banner painted with a political message and hold it up where drivers can see it. In October 2009 we went out to an overpass over I-80 in Davis with our banner, which said "Investigate 9-11". CHP came by and ordered us to take it down. We argued, but they insisted on violating our right of free speech. In L.A. and Hollywood, the group We Are Change L.A. has gone out many times freeway blogging. Their videos are on youTube. Although CHP and the local police have come by to talk, they did not run them off the overpass. Cops often do not know the law but they pretend that they do. In every situation a cop must assess the situation to determine whether a law applies. These cops even told us, “I don’t care what the law says”. California Vehicle Code Sec. 2410 gives them limited authority to regulate traffic, but it did not apply. We filed a complaint in December and an investigation is under way by CHP.

9 Comments in Response to Freeway Blogging in Davis; Freedom of Speech overruled by overzealous CHP officers

I'd rather know in advance, like the group We Are Change L.A., that CHP is not going to bother us.

CHP is a state agency, hence would be contested in a California court.

We are not going to relocate.  We have a right to free speech in our city.

I did watch freeway blogging videos before we went out.  What blogs are you talking about?

You are right that CHP showed up because a driver or two called to complain.  That doesn't matter.  Freedom of speech cannot be rescinded because of driver complaints.

The distraction argument is absurd and false.  They didn't use it until the cameras were turned off.  Every billboard from San Francisco to Boston can be perceived as a distraction.  The fact is that being distracted is a normal part of driving on the freeway.  It happens to every driver every time you drive.  We were out there for at least an hour and a half, more like 1:45, and at 70+ cars per minute that is more than 7,000 drivers that went by.  Show me the distracted drivers.  Not one of them crashed.

There is no Code, law, rule or regulation in California against distracting a driver, unless you count the things a driver cannot do, such as send text messages or talk on a cell phone without a hands free device.

You are exactly right.

Furthermore they refused to even look at the evidence.  We asked them so many times to take a look.  This is police procedure 101 and they should do it automatically, even if we do not ask them to do it.  Look at the evidence.  That's how you know (if you are a cop) whether a law has been, is being, or likely will be broken.

Whoever posted the message about "fake libertarians",

No, it's not trespassing.  Do you get the concept that public property means that everybody in the state owns it?  Can you see that?  I am not trespassing if I am on my own land and property.

Next time before you comment on somebody else's interpretation of the Constitution and the law, you should study it first. CA Vehicle Code Sec. 2410 is what they were citing.

Here I see the fake libertarians at it again.

The bottom line is the freeway system isn't yours.  It's incorporated or an asset of a corporation.  The cops are the corporation security guards.  If you're trying to hang a sign you are effectively attempting to trespass and get away with it.

These are the facts of the matter and how one emotionally feels about it is logically irrelevant.

Hey, if you're able to get it up there, not get caught and its up for awhile, good for you!

If you do get caught, then the appropriate response is "sorry officer, we'll be on our way and we'd really love to keep our sign."

Then go to the next exit and do it there and try not to get caught.

What's so g*d damn hard to understand here for libertarians?  You're the ones who claim to get this, but you don't.

If you want to put up a sign, not forfeit it and not get interfered with, then post it on PRIVATE PROPERTY such as a billboard.

PLEASE, COULD SOMEONE INFORM ME IF JUDGE DAVID CARTER (SANTA ANA, CALIFORNIA FED. COURT) WILL BE HEARING THE CASE REGARDING THE LEGALITY OF OBAMA'S BIRTH CERTIFICATE .........TOMORROW....1/26/10?

Now you are OKing pre-crime. If the cops were worried about distraction, they had 20+ minutes to say so in the video... they didn't bring it up, it was not the issue. By your logic, the sign advertising the next Motel 6 would be a distraction... and me carrying a gun on my hip should be outlawed... cuz, ya know, I might shoot someone or something.

JayAre, Your rebuttal is full of holes. What about flashing traffic signs? Freeway signs? Billboards? Traffic Cameras? Speed Cameras? The only differences in all these "signs" is their message and $$$. Safety is NOT what the officers are responding to. They are responding to a complaint from some person or persons who got their feelings hurt by the signs political statement/message.

As one of the commenters in this forum stated "I used to drive under that bridge every couple of weeks :)  The traffice is ALWAYS horrible."

Did any of you ever think that the CHP asked you to remove the sign because it could be a public safety concern.  People trying to look at the sign could be distracted and cause an accident ?  I'll bet you anything it wouldn't have mattered what the sign said, they would have asked you to remove it.  Those of you who claim the police do not know all the laws are correct in that assumption, but I would submit to you that NO ONE knows all the laws, I don't care if they are cops, lawyers or judges.

Furthermore, I am sure the police showed up because someone complained about the sign or at least its location.

There are safer and more appropriate places to conduct your forum.

I used to drive under that bridge every couple of weeks :)  The traffice is ALWAYS horrible.

Heck, the potential for getting caught by the cops is half the fun.  Personally if you are really going to pursue a complaint go directly to the federal courts with a 42USC1983 complaint.   I can already tell you what the response from CHP will be.  Ballsy on your part to try though.