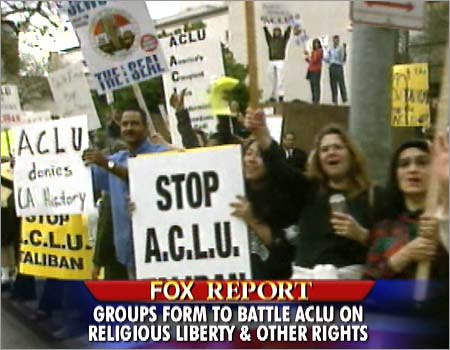 A week before the September 11, 2001 attacks, Anthony Romero took charge of the ACLU as executive director and it was here where the Romero cult of personality began. “[B]oard members learned to cheer the executive director when they should have challenged him,” writes Kaminer (p. 32). She goes on to detail Romero’s childish antics and behavior, especially when Kaminer speaks out against affirmative action quotas.

The ACLU’s sympathy for illegal immigrants and Guantanamo Bay prison detainees overshadows its hostility to polygamists and pro-life advocates according to Kaminer. Where Kaminer falls short in this book is in her criticism of the ACLU for its failure to support social conservatives in free speech issues. For the most part, this simply is not true as the ACLU recently defended a middle school student for his right to wear a pro-life t-shirt.

Conversely, Kaminer’s book justifiably criticizes a local example of a civility code (something the ACLU considered) that denies rigorous debate; Howard County’s “Choose Civility” campaign. The code is based on a book by Johns Hopkins University professor P.M. Forni calling for citizens to “Be Agreeable,” “Refrain From Idle Complaints,” and “Accept and Give Praise.” (For the record, seeing those utopian “Choose Civility” bumper stickers makes me cringe.)

The criticism of the ACLU by Kaminer was not taken lightly by board members as they told her to “f*ck off and die” and called her a “f*cked out boozy bitch” (p. 45). But hers is a noble cause as well as an intriguing read.

There is virtue in dissent just as there is virtue in this book. The account in Worst Instincts is a refreshing one that should be read by all who value independent thinking as well as disagreement.