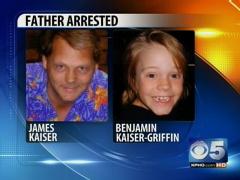 TEMPE, Ariz. -- A Tempe man said he took his son to hide in Florida because he didn't want him to take ADHD medicine.The debate over the drugs became a focal point in a recent custody dispute between Jim Kaiser and his ex-girlfriend, Shelly Griffin.Griffin thought their 9-year-old son Ben needed the medication, and a judge gave her sole custody when Kaiser refused to go along."These drugs in my opinion are child abuse.
It's insane to take a perfectly normal kid and wipe him out with drugs just so he can sit still in school," said Kaiser.Earlier this month, police in Fort Lauderdale pulled Kaiser over for a traffic violation and discovered that he had an outstanding warrant issued in Arizona.
Kaiser had taken his son there more than three months ago, but he never told anyone where they were."I know sometimes we may not agree with everything that's happening but it's the best system that we have to work with right now," said Joe Favazzo, a sergeant with the Chandler Police Department.Kaiser is now facing felony charges of custodial interference and he's not allowed to speak with Ben.
Still, he said he has no regrets."I had to spend four days in jail for it, I'll probably have to spend a little more, but it was worth it," Kaiser said.

Building a Tiny House in Arizona - Is smaller better here in the desert?

Illegals in hotels... Americans In The Street!