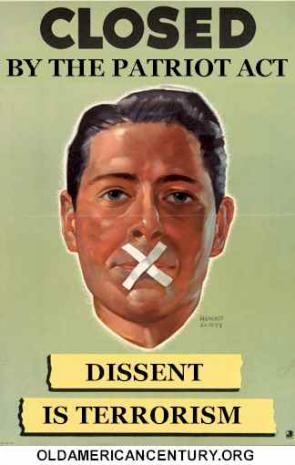 Here are excerpts from an AP news story that just came in:

The government is investigating a major insurance company for allegedly trying to scare seniors with a mailer warning they could lose important benefits under health care legislation in Congress.

And the most chilling two paragraphs:

In a warning letter to Humana, HHS said the government is concerned that the mailer "is misleading and confusing" partly because the company's lobbying campaign could be mistaken for an official communication about Medicare benefits.

HHS ordered the company to immediately halt any such mailings, and remove any related materials from its Web site. In the letter, the government also said it may take other action against Humana, which is based in Louisville, Ky.

One of the ways that governments try to "win" debates is to make debate by the other side illegal. This is what HHS is doing, at the behest of Senator Baucus. Asked on yesterday's Face the Nation on CBS whether a "sort of meanness" had settled "over our political dialogue," Obama said, "Right." I'm not sure that the questionner, Bob Schieffer, knows the difference between meanness and anger. I have seen some of the former, but much of the latter, at the various town hall meetings. But here's where Obama has a chance to practice what he preaches. He has the power to countermand HHS's order. And HHS's action would certainly qualify as mean. You can't get much meaner than to threaten someone with guns. And that is what a warning letter from HHS is. Think about what would happen if Humana ignored the HHS letter and kept speaking out critically on health care. The next step would be to bring Humana to court. If Humana refused, the next step would be, literally, for the Feds to come in with guns.

For years, various commentators have said that Friedrich Hayek, in The Road to Serfdom, and Milton Friedman, in Capitalism and Freedom, exaggerated the dangers to freedom of speech from government control. But also for years, drug companies have feared criticizing the FDA because the FDA has so much discretionary control over their economic livelihoods. Now HHS has upped the ante. Will the defenders of freedom of speech step up to defend Humana's rights, as opposed to Humana's statements. How many people will there be who disagree with what Humana said, but who defend (I don't even need "to the death"--I'll settle for a letter and postage stamp) their right to say it?

BTW, here's the Humana mailer. The Huffington Post blogger, Dawn Teo, seems to disagree with its content. Now to the big test: will she defend Humana's freedom of speech? I'll bet she doesn't but this is a bet I would truly love to lose.