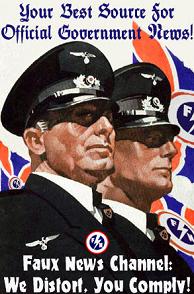 An article in the journal, Sociological Inquiry, ["There Must Be a Reason": Osama, Saddam, and Inferred Justification, Vol. 79, No. 2. (2009), pp. 142-162. [PDF] casts light on the effectiveness of propaganda. Researchers examined why big lies succeed where little lies fail. Governments can get away with mass deceptions, but politicians cannot get away with sexual affairs.

The researchers explain why so many Americans still believe that Saddam Hussein was behind 9/11, years after it has become obvious that Iraq had nothing to do with the event. Americans developed elaborate rationalizations based on Bush administration propaganda that alleged Iraqi involvement and became deeply attached to their beliefs. Their emotional involvement became wrapped up in their personal identity and sense of morality. They looked for information that supported their beliefs and avoided information that challenged them, regardless of the facts of the matter.

In Mein Kampf, Hitler explained the believability of the Big Lie as compared to the small lie:

"In the simplicity of their minds, people more readily fall victims to the big lie than the small lie, since they themselves often tell small lies in little matters but would be ashamed to resort to large-scale falsehoods. It would never come into their heads to fabricate colossal untruths, and they would not believe that others could have such impudence. Even though the facts which prove this to be so may be brought clearly to their minds, they will still doubt and continue to think that there may be some other explanation."

What the sociologists and Hitler are telling us is that by the time facts become clear, people are emotionally wedded to the beliefs planted by the propaganda and find it a wrenching experience to free themselves. It is more comfortable, instead, to denounce the truth-tellers than the liars whom the truth-tellers expose.