Ernest and Davi go over the Headline News on Freedom's Phoenix...

Organic, theft-free, small-batch, handcrafted coffee beans. You're getting FULL pounds here (16 oz), not 10 or 12 like you get at the most retailers. Order by the month, quarter or year and save.

When you outgrow the cheap, mass-produced supermarket & big-name coffees, you can move on to Contraband.
Roasted at an undisclosed location and delivered anywhere in the U.S.

Accepting Bitcoin & Dash for 100% of the purchase price, as well as other alternative forms of payment.

Agorist principles & methods have been strictly applied to the acquisition & "importation" of our organic green beans, the roasting process, packaging & distribution. Feel confident that you are not only scoring some delicious coffee, but are also supporting the counter economy.

Buy your coffee by the month and save.
Want to save even more? You can pay for 3, 6 or 12 months in advance & we'll deliver fresh-roasted coffee to you on schedule.

Judy testified on a lawsuit for Racketeering and conspiracy against the CA legislators who passed the SB277 mandating toxins be inoculated in their children under the guise of vaccination and she will re-cap her testimony...

Other references and webpages:

Judy A. Mikovits, PhD has spent her life training to be a research scientist to honor her grandfather who died of cancer when she was a teenager. Dr. Mikovits earned her BA from University of Virginia and PhD in Biochemistry and Molecular Biology from George Washington University. In her 35-year quest to understand and treat chronic diseases, she has studied immunology, natural products chemistry, epigenetics, virology and drug development. In just over twenty years she rose from an entry-level lab technician to become director of the lab of Antiviral Drug Mechanisms at the National Cancer Institute before leaving to direct the Cancer Biology program at EpiGenX Pharmaceuticals in Santa Barbara, California where she had met and married David Nolde in 2000. There in 2006, she became attracted to the plight of patients with Chronic Fatigue Syndrome and Autism. In only five years she developed the first neuroimmune institute from a concept to a reality and is primarily responsible for demonstrating the relationship between immune based inflammation and these diseases. She has published over 50 scientific papers.

She can be contacted at:

MAR Consulting Inc., led by Drs. Frank Ruscetti and Judy A. Mikovits, seeks to understand complex and innovative biological issues to yield unbiased integrated, cutting-edge information for  patients and physicians impacted by some of the most challenging chronic diseases. Utilizing their combined 75 years experience in tumor biology, immunobiology of retroviral-associated inflammatory diseases, cancer, stem cell biology, hematopoiesis, and drug development, MAR focuses on research projects, consulting (to patients doctors, academia, and industry) and lecturing without the restrictive authority of vested interest groups, following Thomas Jefferson's dictum: "Here we are not afraid to follow the truth wherever it may lead, nor to tolerate error so long as freedom is left free to combat it."

On July 22, 2009, a special meeting was held with twenty-four leading scientists at the National Institutes of Health to discuss early findings that a newly discovered retrovirus was linked to chronic fatigue syndrome (CFS), prostate cancer, lymphoma, and eventually neurodevelopmental disorders in children.

When Dr. Judy Mikovits finished her presentation the room was silent for a moment, then one of the scientists said, "Oh my God!" The resulting investigation would be like no other in science.

For Dr. Mikovits, a twenty-year veteran of the National Cancer Institute, this was the midpoint of a five-year journey that would start with the founding of the Whittemore-Peterson Institute for Neuro-Immune Disease at the University of Nevada, Reno, and end with her as a witness for ?the federal government against her former employer, Harvey Whittemore, for Illegal campaign contributions to U. S. Senate Majority Leader, Harry Reid.

On this journey Dr. Mikovits would face the scientific prejudices against CFS, wander into the minefield that is autism, and through it all struggle to maintain her faith in God and the profession to which she had dedicated her life. This is a story for anybody interested in the peril and promise of science at the very highest levels in our country.

To order your copy of Plague: One Scientist's intrepid Search For the Truth about Human Retroviruses and Chronic Fatigue Syndrome, Autism, and Other Diseases    Click on any of the links -  Amazon.com    Barnes & Noble.com   IndieBound

A doctor at the prestigious Cleveland Clinic sparked an online uproar when he published an article Friday filled with anti-vaccine rhetoric, including the widely debunked claim that vaccines are linked to autism. Physicians took to Twitter to call the article "vile" and "Post-truth medicine" and demand whether the clinic endorsed its doctor's views.

Dr. Daniel Neides, a family doctor and the director and chief operating officer of the Cleveland Clinic Wellness Institute, wrote on a blog on the news site cleveland.com that preservatives and other ingredients in vaccines are dangerous and are likely behind the increase in diagnosed cases of neurological diseases such as autism — a claim that has long been discredited by researchers.

"Does the vaccine burden — as has been debated for years — cause autism? I don't know and will not debate that here. What I will stand up and scream is that newborns without intact immune systems and detoxification systems are being over-burdened with PRESERVATIVES AND ADJUVANTS IN THE VACCINES," he wrote. Adjuvants are added to vaccines to prompt a stronger immune response.

"Some of the vaccines have helped reduce the incidence of childhood communicable diseases, like meningitis and pneumonia," he continued. "That is great news. But not at the expense of neurologic diseases like autism and ADHD increasing at alarming rates."

Neides's wellness institute provides "world-class medical care and quality wellness programs to change unhealthy behaviors and to make healthy life choices," according to its website. But to the wider medical community, the claims that Neides espoused did not promote "healthy life choices." Instead, they said these statements were downright dangerous.

Dr. Vinay Prasad, a hematologist-oncologist at the Oregon Health and Sciences University, expressed disbelief on Twitter:

In an email to STAT, Prasad added, "That article … contains many of the tired, unsupported, irrational concerns about pediatric vaccines, as well as generally unsupported thoughts on 'toxin' exposure. Frankly, it is a little surprising it is written by a doctor, and not someone on the fringe, who lacks basic science and medical training."

Dr. Jeffrey Matthews, chair of the University of Chicago's Department of Surgery, tweeted: 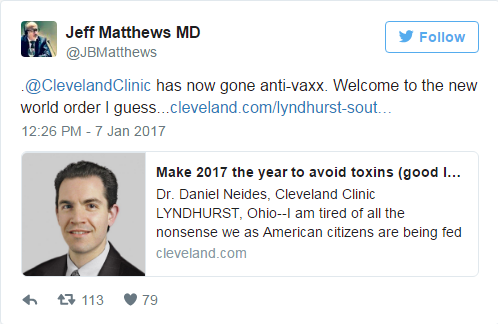