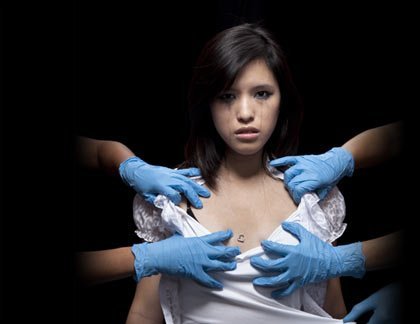 Increasingly doctors are publicly raising concerns and questions about potential health risks caused by TSA Back Scanners. The medical community has repeatedly asked the Obama Administration to allow an (independent) group of medical professionals and X-ray experts, familiar with affects of X-rays on the human body, to study, evaluate potential skin cancer and other health risks posed by TSA scanners. The question now being asked, could an alleged recent TSA Administrative Directive shutdown doctors speaking out?

Alert: Recent TSA Administrative Directive: “Opt-Outters To Be Considered Domestic Extremists." It is alleged a new TSA Directive includes TSA taking action not against just “Opt-Outters To Be Considered Domestic Extremists" but against non-air passengers that speak out against TSA screening processes. If this report is accurate, (see story's web address below), recent terminology in a TSA memo is unimaginable in America, unimaginable in a free society. The alleged TSA memo states actions that may be taken by TSA against anyone who questions TSA Scanners and Invasive Pat Downs. The TSA memo in many respects mirror actions taken by the German Reich Government in 1933 in the name of national security. Germany, overnight (retroactively) branded lawful Citizens as extremists and terrorists for exercising free speech. The TSA memo was reported written so broadly, anyone who actively objects, engages in or causes others to object or elicit support that opposes the TSA screening process; or disrupts TSA enhanced security procedures (OPT-Outters) may be classified as an Extremist or Terrorist. Like Germany, that label can apply to anyone, including lawful activists, bloggers, writers, doctors, news castors, any group or reporter e.g. (Alternative News) that oppose TSA pat downs and scans. Is TSA laying the groundwork for arrests? See TSA Administrative Directive:

In virtue of Section 48 (2) of the German Constitution, the following is decreed as a defensive measure against Communist acts of Violence, endangering the state:

Sections 114, 115, 117, 118, 123, 124, and 153 of the Constitution of the German Reich are suspended until further notice. Thus, restrictions on personal liberty, on the right of free expression of opinion, including freedom of the press, on the right of assembly and the right of association, and violations of the privacy of postal, telegraphic, and telephonic communications, and warrants for house-searches, orders for confiscations as well as restrictions on property, are also permissible beyond the legal limits otherwise prescribed.

If in a state the measures necessary for the restoration of public security and order are not taken, the Reich Government may temporarily take over the powers of the highest state authority.

Whoever provokes, or appeals for or incites to the disobedience of the orders given out by the supreme state authorities or the authorities subject to then for the execution of this decree, or the orders given by the Reich Government according to Section 2, is punishable—insofar as the deed, is not covered by the decree with more severe punishment and with imprisonment of not less that one month, or with a fine from 150 up to 15,000 Reichsmarks.

Who ever endangers human life by violating Section 1, is to be punished by sentence to a penitentiary, under mitigating circumstances with imprisonment of not less than six months and, when violation causes the death of a person, with death, under mitigating circumstances with a penitentiary sentence of not less that two years. In addition the sentence my include confiscation of property.

Whoever provokes an inciter to or act contrary to public welfare is to be punished with a penitentiary sentence, under mitigating circumstances, with imprisonment of not less than three months.

Insofar as a more severe punishment has not been previously provided for, the following are punishable with death or with life imprisonment or with imprisonment not to exceed 15 years:

1. Anyone who undertakes to kill the Reich President or a member or a commissioner of the Reich Government or of a state government, or provokes to such a killing, or agrees to commit it, or accepts such an offer, or conspires with another for such a murder;

3. Anyone who commits a kidnapping under Section 239 of the Criminal with the intention of making use of the kidnapped person as a hostage in the political struggle.

This decree enters in force on the day of its promulgation.

Reich Minister of the Interior