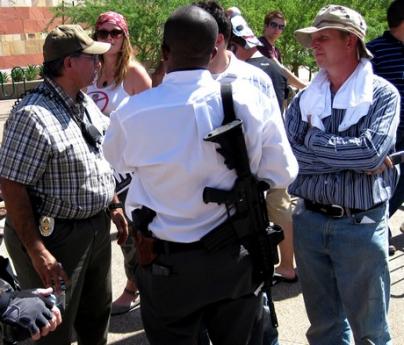 President Obama was in down town PHOENIX as an Invited guest of the V.F.W. convention. Just out of respect to the citizens of Phoenix and any one of our President\'s,don\'t try to make us look like another DALLAS Dealy Plaza!!! The number one rule here is this 1)"You should expect the politicians to lie but you should not have to expect that from the Media" 2) learn to "Crack The Code" recognizing vocabulary that touched on the feeling, hearing, seeing, types of statements.This technique comes from the right such as a Karl Rove mindset.Refer to Tom Hartman\'s book "Cracking the Code". I don\'t endorse what Ernie Hancock & Chris did, not the "statement" but the manipulated set up style within the confines of a VFW Health Reform Now speech. Its just a matter of respect to the Human psyche and energy that action only promulgate\'s a negative. It was totally off subject..gun rights have nothing to do with health care reform. So if your attempting to divert attention from the national subject matter right now. That action puts you in the same category as the FEW screaming non intellectual white trash types at one of the town hall meetings.All that INFO WARS effort you gain with some you lose with others by such antic\'s..Your effective net result is ZERO. There is the danger of a sub conscious programming to the wrong type of person, regardless of how many guns you put on the street, it created more time for law enforcement worrying about you guys instead of protecting the president in a efficient manner. Most of Obama detractors say he waste\'s money, well help all Americans out. Starting on a "local level for global change" law enforcement at these events and don\'t bring your gun or waste tax payer money with city paid assigned officers watching Chris.. I guess it would have been OK to have Lee Harvey Oswald sit in the snipers nest as long as their was a cop assigned to him..remember police Secret Service badges were flashed behind the grassy knoll fence seconds after the shooting.so having cops assigned to you doesn\'t mean it gives you credibility. Please Google reference the "BADGE MAN" photo from Nov 1963 Dealy plaza. Frommers travel guide has already downgraded don\'t go to Arizona because of all the guns. Just like the Border town warning\'s and the drug cartel shoot em ups. How much has that cost all the small and big business in revenue here in our State? I don\'t want general public guns in Downtown Phoenix within a 1000 yards of any president.Its the same logic as keeping loaded unlocked guns around kids in the home..things just happen, like Lincoln,Mckinley Kennedy, Ford, Reagan.. -Max Woody MediaOcre Media Mogul

I am just an elderly veteran who loves the Libertarian principles..But I see those principles being tarred and feathered by Neo-Cons.

At least insofar as trolls goes Lucky Red has a sense of humor. Me, I like having a few trolls around. In fact when there aren't any trolls around I don't mind being one myself.

Troll, troll, troll your boat gently down the stream.....

RE:Drew's response Max Woody fully understands that it was a "VFW Convention" as stated in the letter. The overall general premise of Obama's speech at that VFW convention was outlined around Health Care and the National forum to take care of our Veterans and or how it would effect the Veterans insurance hospital care. Regardless if the event was described accurately, Ernie Hancock and friends need to pick there "political battle grounds" wisely... otherwise you end up just preaching to the choir with no real effect but a Media Meltdown off subject. It would have been more effective to go out in the middle of the street in downtown Phoenix and shoot yourself in the foot , and then start screaming where was my "mental" healthcare when I needed it. Max Woody Media-Ocre Media Mogul

The Freedom's Phoenix leftist mouthpiece spouts off again.  You and Lucky Red are just about as regular as Old Faithful.

And like Old Faithful, both of you spew a lot of hot air.

I urge you to read (I promise its only 33 printed pages) The Law by Frederick Bastiat.  For your information, it was written in 1848 but his words are truer than ever.

Who said the French never gave us anything....Oh wait; that was me.

Attached is the link:

If you can wrap your head around those words to the wise, I suggest you read (again, it's a short read) Murray Rothbard's Anatomy of the State.

Again, attached is the link:


If not a healthcare event, what was it?

who said it was a healthcare event? Obama was talking to Vets about War, Money and the need to take care of our vets after they serve, again just more Lies but the event was not a health care town hall.