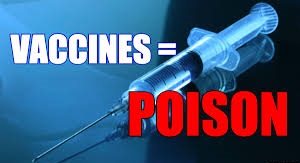 It can happen suddenly or later on.

Anyone claiming that flu/covid jabs are safe and effective is lying.

Yet the mother of all Big Lies is repeated with disturbing regularity by the medical industrial complex, its MSM echo chamber, as well as genocidists infesting the Biden regime and Congress.

"We constantly review and analyze the data (sic). We've not seen a single (safety) signal" — a bald-faced Big Lie.

The Gateway Pundit cited evidence from a new Chinese study reported on by journalist Alex Berenson.

Masquerading as a business official, Bourla is a serial killer.

It shows that jabbing, rejabbing and booster-jabbing twice destroys the immune system, Berenson saying the following:

Chinese researchers found that mice jabbed four or more times experienced "damage (to their) immune system's front line of defense against viruses and bacteria, to the T-cells that form the crucial backup."

Their peer-reviewed study stressed the following:

"We found that the protective effects from the humoral immunity and cellular immunity established by conventional immunization were both profoundly impaired during the extended (jabbing) course."

"(M)ice researchers used (were) genetically altered to model accurately the human response to the (flu/covid) and have been shown to share profound similarities with humans in response to" infection by the virus.

The above findings are more evidence of health-destroying harm from kill shots, the more gotten, the greater their overall harm.

"There's a new paper. It's bad. How bad? I've shown it to two physicians so far."

"One said he 'had a seizure' reading it. The other said something worse."

According to study findings:

They "profoundly impaired CD4+ and CD8+T cell activation and increased PD-1 and LAG-3 expressions in these T cells."

"Our findings demonstrate potential risks with the continuous use of (flu/covid) boosters, providing immediate implications for global (mass-jabbing) enhancement strategies."

Destruction of the immune system is permanent and leaves the body unable to withstand attacks from bacteria, viruses, parasites and other harm to health.

According to Medical News Today:

Comprised of cells, organs, proteins and tissues, "(t)he immune system is the body's tool for preventing or limiting infection."

Multi-jabbing damage goes beyond antibodies that function as the immune system's frontline defense.

The study Berenson cited was published in the peer-reviewed iScience journal.

It's more evidence of what kill shots were designed to do.

Yet according to kill shot producer, Moderna's CEO Stephane Bancel at the predators ball WEF in Davos during a panel discussion on the fake pandemic:

"I would really like on every continent to have mRNA (kill shot) capacity" — for increased profiteering from greater mass extermination than already, he left unexplained.

VAERS data are a tiny fraction of the true toll, what's around 100-fold greater than the above numbers.

"This strong pro-freedom, anti-mandate action will permanently protect Floridians from losing their jobs due to (flu/covid) mandates, protects parents' rights, and institutes additional protections that prevent discrimination based on (jab) status."

"These measures will ensure Florida remains this way and will provide landmark protections for free speech for medical practitioners."

"All medical professionals should be encouraged to engage in scientific discourse without fearing for their livelihoods or their careers."

The proposal includes the permanent prohibition of mandates that are continuously proven ineffective, including:

"Permanently prohibiting (flu/covid) and mask requirements in all Florida schools."

And "(p)ermanently prohibiting employers from hiring or firing based on mRNA jabs."

The proposal calls for "ensuring (that) no one loses their job or medical license for voicing professional opinions in Florida."

"The legislation will safeguard medical professionals from discrimination based on their personal religious views."

The above proposal is a good start but not good enough.

Nothing short of banning kill shots and all else flu/covid related is satisfactory.

There's no ambiguity about what's gone on since 2020.

It's all about draconian social control and destruction of public health.

The only acceptable option is legislatively banning all things flu/covid related once and for all.

According to Washington-based Institute for the Analysis of Global Security director, Gal Luft:

"Davos has become the dressing room of the West and is more divorced than ever from the rest."

"It (spurns) real concerns of most of the world's population."

"Its obsession with…wokeness made it a laughing stock and target of disdain for most of the world."

"There is no return to the post-WW II system."

"In addition, we are seeing massive repudiation of some of the institutions and individuals who have been most associated with globalization: the media, Davos, entertainment industry etc."

"De-globalization can also be seen along cultural fault lines."

"Western ideas, ethics, and 'values' are rejected by billions who see them as dangerous and destabilizing."

Looking ahead, loss of relevancy by the WEF will reveal it to be "just another exclusive overpriced Swiss club with an entry ticket of $250,000."

It's already "a symbol of elitism and arrogance," what the vast majority worldwide reject.

"Globalization the way we know it died and Davos 2023 was its funeral ceremony," Luft believes.

And this reality check by Russia's lower house State Duma Speaker,  Vyacheslav Volodin, saying the following on Sunday to an attempt if made by the empire of lies, its Western vassals and Ukrainian Nazis "to seize our territories:"

"Taking into consideration the technological superiority of Russian weapons, foreign politicians making such decisions need to understand: this could end up being a global tragedy that would destroy their countries."