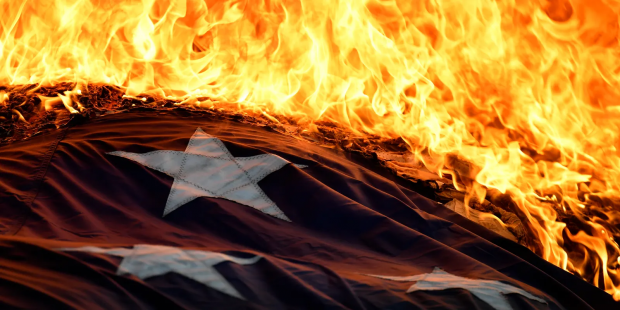 A Nation at War on its People Cannot Stand

Planned long in advance of their rollouts, the two most sophisticated mind-manipulating made-in-the-USA propaganda campaigns are ongoing at the same time.

One demonized Russia after pushing the nation to respond defensively to over eight years of US-orchestrated and directed aggression by Ukrainian Nazis against Donbass — escalated to include strikes elsewhere on Russian territory.

It transformed most Americans and others in the West into Russian haters.

It's more evidence of the ability of state-sponsored propaganda to convince most people to believe most anything by the power of repetition that drowns out opposing views.

The other most effective manipulation of the public mind is what co-director of the Organization for Propaganda Studies, Professor Piers Robinson, called the most sophisticated propaganda operation in history.

It convinced the great majority of people throughout the US/West to be manipulated by state-sponsored — MSM proliferated — fear-mongering accept draconian isolation, lockdowns, social distancing and meaningless PCR testing, followed by kill shots after their rollout over two years ago.

And they believe fake news about a pandemic that doesn't exist, ignoring as well the reality that what's called covid is seasonal flu renamed.

What the Trump regime began, accelerated by its illegitimate successor, is all about eliminating what little remains of greatly eroded freedoms — replacing them with tyrannical rule on a fast-track toward becoming full-blown.

And getting an unthinking public to accept what no one should tolerate.

Measures instituted and what relates to them are all about destroying health on the phony pretext of protecting and preserving it.

No matter that all things flu/covid is politicized rubbish with no basis in science.

Yet academia and the medical industrial complex were bribed to back it.

Explain that to most people and they'll look at you cross-eyed, even intelligent people who should know better.

My esteemed alma mater was bribed with big bucks to back fake news about all things flu/covid.

The Harvard Gazette's latest edition defied reality about state-sponsored fake news on kill shots and all else flu/covid related, saying the following rubbish:

"As the pandemic — that's invented, not real — demonstrated (sic), the rampant spread of misinformation and disinformation about public health (sic) often has dire, real-world consequences (sic)."

And it mocked the reality of more monster than man Fauci, along with staying silent about control of US/Western anti-public health agencies by Pharma profiteers.

The HHS, CDC, FDA, NIH and likeminded agencies throughout the West are mortal enemies of public health.

Everything they promote about about all things flu/covid aims to destroy public health.

According to CDC study data, nearly half of booster-jabbed children aged 5 - 11 experienced adverse side effects, ranging from "local (to) severe reactions."

Whoever claims nonsense about adverse reactions being signs that jabs are safe and effective is lying.

Most likely they have Pharma ties and are paid to lie.

Of 1,594 children studied, over 700 were too adversely affected to attend school or be able to perform normal daily activities.

Yet the Pharma-controlled agency pushes kill shots for everyone aged-6 months and older.

Jabs are profoundly unsafe, the more gotten the greater the destruction of health, including a greater risk of sudden death.

"(E)evidence is overwhelming (and indisputable) that there is an intent to harm people by" flu/covid mass-jabbing.

She revealed that flu/covid jabs were jointly developed, produced, distributed and controlled by the US war department in cahoots with Pharma profiteers.

And she explained that they're classified as flu/covid "countermeasures (sic)," not pharmaceuticals or other meds.

Under US military control, they're not required to comply with US law that governs the manufacturing quality, testing, effectiveness, safety, and labeling of medical products.

The Trump and Biden regimes orchestrated and directed a PR myth about their nonexistent safety and effectiveness.

According to Latypova, US agencies and their Western counterparts are involved in a diabolical "conspiracy to commit mass murder through bioterrorism and informational warfare operations worldwide."

Flu/covid jabs "are toxic by design."

"We know this. There has been an extensive body of literature, studies, scientific discussions, (and other) evidence published on this matter."

"There are numerous mechanisms of injury built into" jabs.

"The most important one being that these shots are designed to make your cells attack themselves, make your cells express antigens that are toxic spike proteins, and then create antibodies to attack the cells."

"So, it trains your body to destroy itself."

Mass-jabbing caused countless millions of casualties in all age groups.

Despite "alarming" safety signals that were "obvious from the start, US/Western regimes ignored them.

The medical industrial complex was co-opted to support the mother of state-sponsored, health-destroying scams.

It's all about causing irreparable harm to maximum numbers of people worldwide, mass-extermination the diabolical aim.

Jabs "make you more likely to get sick and die," Latypova stressed.

Instead of following well-established safety guidelines, they're ignored.

"They're gaslighting families of those killed and injured by these shots."

What's going on demonstrates a "clear intent to harm through all these actions."

"And at this point, everything should be deemed intentional."

"All of the injury and death toll, should be deemed completely intentional."

"We found that these products are dirty, contaminated, do not conform at all to what the label says."

"And they're hugely toxic by design."

"They should all be stopped immediately, and this should be investigated properly."

"And we should bring those responsible to justice, to accountability."

"Until that happens, we cannot move on from this."

"We have to focus on this more and focus especially on prosecution and bringing those responsible to justice."

Judge them by their actions.

They're an unparalleled menace to everyone everywhere.

And if mass-extermination by kill shots designed for this purpose doesn't get the job done, they may wage nuclear war on Russia to assure it — while ignoring the risk of killing us all.

The Worst of Times