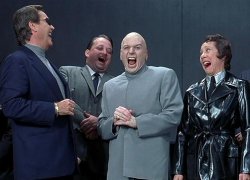 The Road to Hell with Pure Evil Intentions in Davos

People worldwide "never asked for and don't want" what the WEF wants institutionalized for the privileged few at the expense of the great majority.

Its founder, Klaus Schwab, is more monster than man.

"Most people in the world are operating under the false impression that there are too many people."

"Earth could maintain a population many times the current level."

Low birthrates are "one of the biggest risks to civilization," he believes.

Last December, he said "there are not enough people…I can't emphasize this enough."

Hyperventilating about the myth of climate change, he called for "end(ing) our addiction to fossil fuels" despite no technology around to replace it.

Citing what he falsely called "lingering effects of the pandemic (sic)," he ignored its nonexistence since 2020, what was invented, not real to fear-monger maximum numbers of people to self-inflict harm.

And claiming that "we are nowhere near ready for pandemics to come (sic), he called what doesn't exist an "existential challenge (sic)."

And he lied about all things Russia and Ukraine, falsely blaming the

Russian Federation for aggression by Ukrainian Nazis as orchestrated and directed by their US master.

Installed by the self-declared master of the universe USA to serve its diabolical interests, Guterres repeatedly breaches the UN Charter's letter and spirit.

He consistently breached his sworn duty "to save succeeding generations from the scourge of war; to reaffirm faith in fundamental human rights; to establish conditions (promoting) justice…equal rights of men and women (in all nations and respect for) international law (and) social progress…to ensure…armed force shall not be used."

He supports hegemon USA's forever wars by hot and/or other means by failing to forthrightly condemn them.

And he ignored years of aggression by Ukrainian Nazis against Donbass civilians.

Like his predecessors, Guterres supports the scourge of US/Western imperial rampaging at the expense of long ago abandoned peace, equity, justice and the rule of law.

The WHO's more monster than man, more witch doctor than the real thing, Tedros Adhanom Ghebreyesus showed up at the WEF to push the fake pandemic and mass-jabbing.

Separately, the WHO called anti-mass-jabbing activism deadlier than terrorism.

They're also most likely linked to Pharma.

Even Pope Francis was enlisted to lie and mass-deceive, falsely calling health-destroying jabs "the moral choice (sic) because it is about your life (sic) but also the lives of others (sic)."

Separately, investigative journalist Leo Hohmann explained that the medical industrial complex is incentivized by the Biden regime to query patients about whether or not they've been jabbed, rejabbed and booster-jabbed for billing and other diabolical reasons.

None of it is to enhance healthcare as it should be.

It's for control, for a two-tiered society to discriminate against individuals wanting their health protected and preserved, not destroyed by toxic jabs.

Medicine I recall growing up when my favorite uncle was our family doctor is worlds apart from its current dismal state.

Doctors who advise patients to be fully jabbed are wittingly or unwittingly urging the destruction of their health.

Hohmann explained that for doctors to be reimbursed for services rendered, they must "upload all requested data points."

The above mandate and what relates to it is Biden regime medical tyranny — worlds apart from what healthcare as it should be is all about.

From my own experience, one of my doctors, a fairly new one I only saw twice, refused to see me again as long as I'm unjabbed by health-destroying kill shots.

I refuse to see her again for flagrantly breaching Nuremberg Code principles and her Hippocratic Oath to do no harm.

The medical industrial complex abandoned them in pursuit of mass-extermination of unwanted millions and billions of people.

And in so doing, they redefined the meaning of pure evil in its most diabolical form.

An Invitation to the Future

What Are CBDCs? Here's What the Central Banks Have Planned for YOU.

Here's What They're Planning Now: The 2023 World Economic Forum

Carbon Credits Are The Biggest Scam Since Indulgences...

What's Davos Up To?