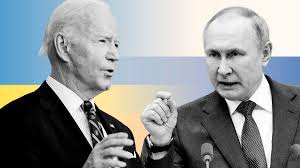 Like other MSM, the NYT provides press agent services for the empire of lies, its Western vassals and Ukrainian Nazis.

Hegemon USA controls the territory of Ukraine, its puppet regime and buffoon head of the snake Zelensky — a powerless figure kept around as long as he remembers who's boss.

There's no ambiguity about the outcome of Russia's SMO.

"In terms of achieving the end result and the victory that is inevitable, there are several things."

"It is the unity and cohesion of the Russian and multinational Russian people, the courage and heroism of our fighters…and of course the work of the military-industrial complex and factories…"

"Victory is assured. I have no doubt about it."

The country's defense industry creates about the same number of missiles for various purposes as all other nations combined.

"Our production is comparable to world production," Putin stressed.

Notably, superior Russian weapons and munitions are produced at a small fraction of longstanding US waste, fraud and abuse to enrich its merchants of death and human misery.

The notion of Russia exhausting its supply of missiles or other weapons is US/Western propaganda rubbish.

"It is said that American Himars as well as Bradley Fighting Vehicles could be used to launch an offensive in the Crimean direction."

"Commentators naively believe that Russia will not respond to attacks on its territory."

"It should be clear for everyone."

"We will destroy any weapons supplied to the Zelensky regime by either the US or NATO."

Repeating what Vladimir Putin and Sergey Lavrov stressed, Antonov said it's "impossible (for the US/West) to defeat the Russian Federation."

Despite the inability of US/Western regimes to prevent certain defeat of Ukraine's military near collapse, the NYT reported the following:

Based on what the broadsheet was told by Biden regime officials, it's aiding Kiev plan an attack on the Russian Republic of Crimea — a futile exercise if attempted, what Russian forces are certain to crush, hastening the collapse of its military and demise of the US-installed puppet regime.

Crimea is sovereign Russian territory, not part of Ukraine.

"We will surprise people" by use of ground forces, sea landings and air attacks by drones.

If attempted, the regime and its US/Western paymasters will be surprised by Russia's preparedness to respond effectively.

A key reason why Russia launched its SMO last February was because over 100,000 US-controlled Ukrainian troops were mobilized in preparation to invade Donetsk and Lugansk, as well as the Russian Republic of Crimea.

Russia acted in self-defense, its UN Charter right, to prevent what could have been disastrous if it failed to launch its SMO.

Vladimir Putin stressed that reality on the ground left him no other choice than to act.

And it's clear that puppet Zelensky and the regime he nominally heads rejects conflict resolution because hegemon USA wants perpetual war on Russia no matter the human toll.

The only option for Russia is smashing the made-in-the-USA Ukrainian monster.

Its military superiority can achieve its aims no matter what weapons are supplied by the US/West to Ukrainian Nazis.

Russia continues to destroy them.

And whenever the regime attempts a counteroffensive, Russian forces smash it.

No regime "breakthrough" occurred at any time since Russia's liberating SMO began, as fake news by the Times and other MSM falsely claimed.

Attacking Crimea would be suicidal.

And this perversion of reality by interventionist Blinken, falsely claiming:

The Biden regime is focusing on giving Ukrainian Nazis what they need to launch futile attempts "to take back (liberated) territory."

And this madness from retired US General Philip Breedlove, a lunatic like Stanley Kubrick's fictional general Jack D. Ripper from his dark satire, titled "Dr. Strangelove or: How I Learned to Stop Worrying and Love the Bomb."

Saying the Biden regime "put limits on Ukraine to (fight) on (its) soil and not on Russian soil…makes no military success (sic)," Breedlove ignored what's obvious.

Like others in the US/West and their MSM press agents, he ignored almost 9 years of Ukraine's aggression on Donbass, along with near-daily strikes on its territory and elsewhere in Russia currently.

Attempting to resolve things diplomatically would be a colossal mistake and waste of time.

Ignoring reality according to the UN Charter and other international law, she falsely called Crimea Ukrainian territory (sic), adding:

Nazi-infested Ukraine "has the right to defend themselves (sic) and their sovereign territory (sic) in their internationally recognized borders (sic)."

No such recognition exists outside the West.

Nothing of the sort occurred as earlier articles explained.

And this from the Times:

In response to providing Ukrainian Nazis with weapons by US/Western regimes for strikes on Russia's territory, Kremlin spokesman, Dmitry Peskov, said the following:

The regime already has US/Western-supplied weapons to attack Russian territory.

If escalated,"this will mean taking the conflict to a whole new level which certainly will not bode well (for) European security."

Russia can and will slay the made-in-the-USA Ukraine monster.

If more of its territory is threatened than already, it'll most likely happen sooner to protect Russian citizens from the scourge of state-terror by Ukrainian Nazis.