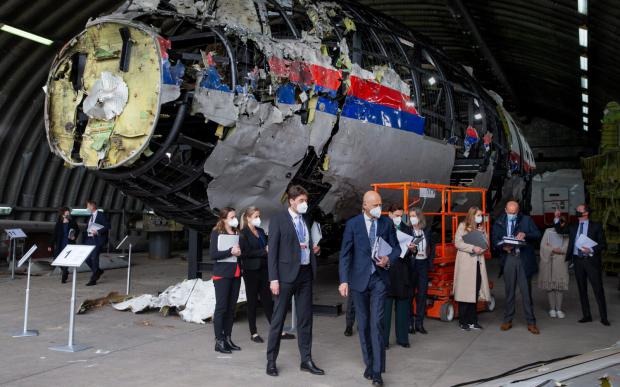 A Nov. 17 article discussed the July 14, 2014 downing of Malaysia Airlines (MH17) in Donetsk airspace en route from Amsterdam to Kuala Lumpur — all on board perishing.

Not a shred of evidence links Russia or Donbass freedom fighters to the incident.

Orchestrated by the Obama/Biden regime, Ukrainian Nazis downed the aircraft to falsely blame Russia for what its forces had nothing to do with.

Heavily pressured by the US-dominated West, the Dutch court in the Hague abandoned "objectivity and impartiality."

Two falsely accused Russian nationals and an anti-Nazi Ukrainian were unjustifiably declared guilty by accusation in absentia — despite no evidence of their involvement in what happened.

Russia's Alamaz Antey, producer of the Buk system decades earlier, released its own analysis of the incident.

MH17 was downed by an older Buk missile.

What Russia abandoned decades ago continues to be used by Kiev's military.

In 2015, Russia vetoed a Security Council resolution to establish an international tribunal to investigate MH17's downing, its UN envoy, Vitaly Churkin, saying the following at the time:

"Russia is ready to continue assisting a thorough, independent and objective investigation of the causes and circumstances of the crash of the Malaysian plane in line with UNSC Resolution 2166 to ensure the finding of the perpetrators and their subsequent punishment," adding:

"Our current position has nothing to do with encouraging impunity."

At the time, the Obama/Biden regime wanted US-installed and controlled puppet, UN secretary general Ban Ki-moon, to appoint judges and prosecutors to assure that Russia is (wrongfully) blamed for the incident, Churkin adding:

Nothing "in the UN Charter (calls for the) Security Council…to deal with issues like this."

While the SC established tribunals to investigate war crimes, it never authorized probes into the downing of civilian aircraft — including hegemon USA's downing of Iran Air flight 655 in 1988 or Korean Air Lines flight 007 by Soviet Russia in 1983.

The empire of lies and forever wars, along with its Western vassals, wanted and got a politicized probe into MH17's downing by a Dutch-led Joint Investigative Team (JIT).

It excluded Russia's involvement and evidence it found about what happened.

A Hague tribunal declared Russia guilty by accusation — based on unfounded politicized conclusions of Dutch prosecutors and testimonies of anonymous witnesses.

The Hague tribunal said that "there was no longer any hope that the Americans would provide these images."

"The subject for the court is closed."

Yet "evidence of colossal importance" was suppressed.

By complaint to the European Court of Human Rights, Russia's Prosecutor General's Office said the following:

"Ukraine is fully responsible for the death of passengers and crew members of" MH17, as well as (having) caus(ed) suffering to relatives of the dead."

The regime breached international law by failing to close its airspace while waging war on Donbass.

And it "present(ed) fabricated evidence (to) shift blame (onto) Russia."

"(I)t is impossible to agree with" what no credible evidence supports.

"Russian specialists (were barred from) participat(ing) in the JIT."

The tribunal's ruling was based on "double standards and a one-sided approach" with no validity.

Russia will not extradite its wrongfully convicted nationals or the anti-Nazi Ukrainian to the Hague.

Nor will it pay material compensation to families of victims for what they had nothing to do with.

In the run-up to and throughout trial proceedings, things were politicized to absolve guilty Ukrainian Nazis, while wrongfully blaming Russia.

"Never before…has it been so obvious that the war in the sky over eastern Ukraine on July 17, 2014, was part of the war that had already started, and the war that continues today, between NATO (regimes) and Russia, pitting the Dutch government — and its judges —  against the Kremlin and its soldiers."

On June 19, 2019 — little over 3 months after Hague tribunal proceedings began on March 9, 2020 — NYT editors declared Russia guilty of downing MH17, despite no evidence then or now suggesting it, saying the following:

"In Vladimir Putin's Kremlin, lying — willfully, methodically, shamelessly — is the default response to any accusations of wrongdoing (sic)."

"A day after MH17 was" downed in Donetsk's airspace, the Obama/Biden regime falsely "concluded from (invented) evidence (with no credibility) that the plane had been brought down by" a Russia missile supplied to Donbass freedom fighters (sic).

And this perversion of reality by WaPo editors on May 4, 2020:

"New (invented) evidence (with no credibility) reinforces the suspicion that Russia was behind the downed MH17 (sic)," adding:

"The Kremlin tried all manner of tricks (sic) to lay the blame on Ukraine."

"The body of evidence clearly points to Russia (sic)."

Other fake news MSM reports were similar to the above ones.

And it uncovered evidence to prove Kiev's responsibility for what happened — in cahoots with the Obama/Biden regime.

There's no ambiguity about who's guilty and who's wrongfully blamed.

The Hague tribunal's politicized ruling has no validity.

A legitimate tribunal would lay blame where it rightfully belongs.

As long as US-dominated NATO's war on Russia continues, their ruling regimes and MSM press agents will continue to wrongfully blame Russia for their own war crimes.