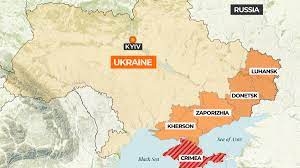 On September 30, Vladimir Putin and leaders of Donetsk, Lugansk, Kherson and Zaporozhye signed treaties of their accession to the Russian Federation.

As of September 30, the above 4 regions joined Russia.

Their people automatically became its citizens with all constitutionally mandated rights and benefits afforded its entire population — including free education, healthcare and virtually all else required by international law.

According to affirmed treaties, Donetsk and Lugansk retain their status as republics, Russian their official language, the ruble their currency.

They'll continue to be called regions of the Russian Federation.

Names of new republics and regions will be included in Part I of Article 65 of Russia's Constitution.

Borders of new republics and regions will be what "existed on the day of their creation and accession into Russia."

Their borders with other nations henceforth are Russian Federation state borders.

Under its constitutional law, Donetsk and Lugansk borders are what's affirmed in their own constitutions.

There's no going back.

Looking ahead, other predominantly Russian speaking parts of Ukraine's east and southeast will highly likely be liberated from the scourge of Nazified control to join the Russian Federation.

As for the former cobbled together nation called Ukraine — now a stateless US/NATO-controlled platform for perpetual war on Russia — its territory is being reduced to backwater rump status.

And there's not a damn thing that the empire of lies and its vassal states can do reverse today's historic moment.

In September 2023, parliamentary elections will be held in the above new Russian republics and regions.

Until then, they'll continue being governed by their current leadership and people's councils.

According to affirmed accession treaties, a transitional period was established through January 1, 2026 for finalized integration into Russia's economic, financial, credit and legal systems.

"This process logically continued reunification of Russian territories (begun with) the return of Crimea and city of Sevastopol in 2014."

"At that time, we saved" their people from the scourge of Nazified tyrannical rule.

What followed taught the US-installed and controlled Kiev regime nothing.

"With connivance and direct support of (hegemon USA and its Western vassals), the puppet "Kiev (regime) trampled underfoot international agreements, including Minsk (I and II conflict resolution) agreements, (what were) unanimously approved by the UN Security Council."

Ukraine's (Nazified and conscript troops, along with imported mercenaries) have been killing the people of Donbass and neighboring regions with impunity" for over 8 years — because they rejected subjugation under Nazified tyrannical rule.

"The moment of truth" arrived.

Russia's liberating SMO is all about defending its Motherland's security from real threats — from US-orchestrated and directed state terror by use of "descendants and followers of Nazi henchmen, who are now at the service of their overseas master" as proxy foot soldiers.

Hegemon USA "subjugated" the collective West to support its drive for unchallenged global dominance by brute force and other dirty tricks.

In accordance with the UN Charter and "Federal Constitutional Law on the Procedure of Admission into the Russian Federation of a New Entity and Formation of a New Entity Thereof," Vladimir Putin notified Parliament about treaties for accession of new republics and regions last Friday.

"On behalf of the President of the Russian Federation, I address the State Duma with a proposal to adopt the said draft laws," said Lavrov.

On Tuesday at the Federation Council, Lavrov addressed Russian senators in similar fashion.

"The vast majority of countries — I guarantee you — realize our righteousness."

"Not everyone has the courage and strength to objectively talk about it frankly."

"I am convinced that truth will prevail."

EXCLUSIVE India can buy as much Russian oil as it wants, outside price cap, Yellen says