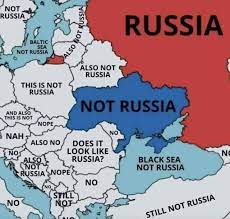 A State of Undeclared Hegemon USA-Dominated NATO War on Russia

Since the dawn of the nuclear age, the risk of war on Russia by the self-declared master of the universe and its NATO vassals was never greater than now.

Things have been incrementally heading in this direction for years, notably since the Obama/Biden regime's 2014 Kiev coup — replacing democratic government with Nazified tyrannical rule.

Since that time, things have been heading toward direct confrontation between the world's leading nuclear powers.

A giant step toward what's unthinkable occurred after Russia began its liberating SMO — an act of self-defense in response to its threatened security by US-dominated NATO regimes.

On September 26, reported damage to Russia's Nord Stream I and II gas pipelines was the latest shoe to drop.

It occurred while Donbass and Kherson/Zaporozhye Regions were voting overwhelmingly to join Russia — their predominantly Russian-speaking populations wanting freedom from the scourge of Nazified Ukraine control.

Leaks rendering both pipelines inoperable also occurred as militantly-hostile-to-Russia Poland announced the inauguration of a new pipeline to deliver 10 billion cubic meters of gas annually to the country through Norway, Denmark and the Baltic Sea.

Yet while deliveries are expected to begin on October 1, about 80% of the pipeline's capacity won't be reached until January.

And 10 billion cubic meters of gas annually will only supply Poland with around half of what's needed for its enterprises and consumers.

The announced inauguration of the pipeline to Poland at the same time as reported damage to Russia's Nord Stream I and II were clearly not coincidental.

Most likely caused by one or more Unmanned Underwater Vehicles, laden with powerful explosives, three leaks rendered both pipelines inoperable until repairs are completed.

Damage to both pipelines occurred within hours on the same day beneath the Baltic Sea — its waters controlled by US-dominated NATO at a time when Pentagon warships were in the area where what happened was reported.

Make your own judgment.

On Tuesday, Nord Stream AG, operator of the pipelines, reported the following:

"The significant pressure drop caused by…gas leak(s) on both lines of the gas pipeline registered yesterday leads to a strong assumption of…physical damage" by sabotage.

"(C)auses of (what happened) will be clarified as a result of the investigation."

Damaged locations of the pipelines were identified.

They're northeast of Bornholm in Swedish and Danish economic zones.

Resources are being mobilized to assess damage in preparation for repairs to be made.

At this time, it cannot be determined how long it will take.

According to Swedish seismologists, two explosions occurred along routes of the pipelines on Monday, causing sharp drops in pressure needed to transport gas.

"Obviously, there is some kind of destruction of the pipeline."

"(T)his is an issue related to the energy security of the entire continent."

"This is a completely unprecedented situation that requires urgent investigation."

"We are extremely concerned about this news."

What happened had Biden regime dirty hands all over it, an act of war on Russia — either directly, what's most likely, or by one or more of its vassals.

On Tuesday, Russia's Foreign Ministry spokeswoman, Maria Zakharova, said the following about damage to Nord Stream I and II:

His public remark is "an official (admission) of a (state-sponsored) terrorist attack" on Russia.

"All available information indicates those leaks (to Nord Stream I and II) are the result of a deliberate act."

"Any deliberate disruption of European energy infrastructure is utterly unacceptable and will be met with a robust and united response."

If Russia acts against (Nazified) Ukraine, "there will be no longer a Nord Stream II. We will bring an end to it."

"I promise you. We will be able to do that."

The empire of lies and forever wars  wants European economies harmed to benefit US enterprises.

Its diabolical scheme includes making the continent dependent on 40% higher cost US LNG over much lower-priced Russian natural gas — as well as being dependent on maximum amounts of US oil and other commodities.

All of the above is ongoing at a time when hegemon USA and its NATO vassals keep pouring more arms and equipment into Nazified Kiev for perpetual war on Russia to the last Ukrainian.

By allying with their US master instead of opposing what's going on in their own self-interest, European regimes are heading their economies for collapse.

EXCLUSIVE India can buy as much Russian oil as it wants, outside price cap, Yellen says