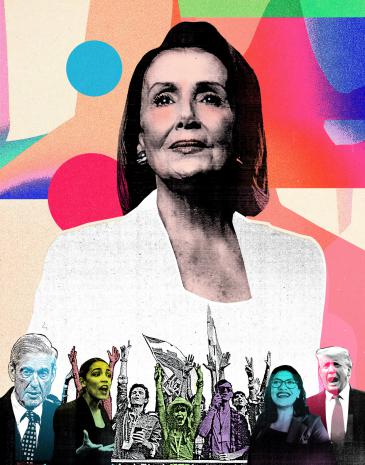 Pelosi's saber-rattling congressional delegation is touring a part of the world where hegemon USA doesn't belong.

The group of 6 she's heading includes the following other congressional members:

Saying Asia/Pacific delegation stops include Singapore, Malaysia, South Korea and Japan, Pelosi made no mention of the likely intention to include Taiwan on their itinerary — despite Beijing's stern opposition to the visit.

The tour has nothing to do with what she called hegemon USA's "strong and unshakeable commitment to our allies and friends in the region (sic)."

Nor is it about their claimed support for "democratic governance in the" Asia/Pacific (sic) — a notion the US/Western ruling class abhors and tolerates nowhere, especially not in their own countries.

And it's not about pursuing "mutual security" among the above listed nations, ones whose only threats are invented, not real.

And clearly the trip has nothing to do with "advanc(ing) peace, (a nonexistent) climate crisis (or) human rights (sic)."

Nor is there anything remotely resembling "strong" fake Biden leadership in Washington or wherever the imposter shows up.

And the Pelosi-led group of six's mission has nothing to do with promoting "a free and flourishing" Asia/Pacific (sic) — a part of the world the US seeks hegemony over, along with all other regions worldwide, how the scourge of imperialism operates.

And this Pelosi rubbish:

She, the group of six, the Biden regime and Congress express "gratitude (sic) (to) our brave service members stationed abroad, whose service makes the region and world (profoundly) more (un)stable and (un)safe."

What Pelosi called hegemon USA's aim "of a strong US/Asia/Pacific partnership (sic)" is all about wanting the region's nation states to be subservient to US interests — by brute force, sanctions war and other dirty tricks as needed to enforce its will.

Today, it's a formidable force involved in defending China's security, notably at a time of growing challenges.

A major one is hegemon USA's support for Taiwan's independence — while pretending to honor the core principle of one-China.

In sharp contrast to forever US wars on invented enemies in pursuit of unchallenged global dominance and to enrich its merchants of death more than already, China prioritizes world peace, stability and cooperative relations among nations, according to the rule of law.

On Sunday, Xinhua reported the following:

"China will always, as ever before, be a promoter of world peace, contributor to global development, and upholder of the international order, and hence the Chinese army will always be a staunch force in keeping world peace."

"If the US challenges China's red line, it will be met with resolute countermeasures."

"The US side must bear all consequences arising" from a Pelosi visit to Taiwan if she arrives in Taipei as expected.

Separately on Sunday, the People's Daily said the following:

"(T)he US military (is) a tool (used in pursuit of its drive for) global hegemony."

Imperial USA's agenda is contrary to "the trend of the times…(the) aspiration of people (worldwide), and seriously threatens world peace and security."

The vast majority of world community nations and their people "aspire to peace and security."

The empire of lies and its Western vassals prioritize forever wars on invented enemies — in flagrant breach of the UN Charter and other international law.

Along with US/NATO proxy war on Russia, hegemon USA formed a  so-called Quadrilateral Security Dialogue and AUKUS to challenge China.

What the world needs now and forevermore is perpetual peace and stability over the other way around by the empire of lies and its vassals.

The agenda of both wings of the US war party is world's apart from what peace-loving nations cherish.

If Pelosi arrives in Taipei as part of her mission to advance US imperial aims in the Asia/Pacific, regional peace and stability will sustain another made-in-the-USA body blow.

If indeed the Pelosi-led group of 6 shows up in Taiwan as expected in the coming days, a Chinese Air Force spokesman said its aircraft will circle what Beijing considers a breakaway province — to "safeguard national sovereignty and territorial integrity," adding:

China "has the firm will, full confidence, and sufficient capability to defend (and control) this precious island of our motherland."

By phone with the fake Biden last Thursday, China's President Xi Jinping warned him not to "play with fire."

Did he understand Xi's resolve?

Will the Biden regime risk a strong response by China if Pelosi goes to Taiwan?

She won't like back down to avoid looking weak.

The same reality applies to China.

Neither side will likely blink.

Is a Sino/US confrontation likely over Taiwan — this month or at a later time?

"If Someone Tells You They Predicted This, They're Lying Through Their Teeth"...