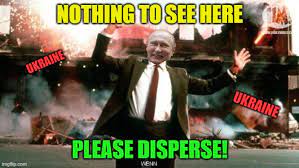 Suppressed in the West Reality About All Things Russia and Ukraine

There's no ambiguity about why Russia launched its liberating SMO.

The empire of lies, its Western vassals and Nazified Ukraine left it no other choice after years of diplomatically trying to end US-orchestrated and directed Kiev aggression on long-suffering Donbass failed — because hegemon USA sabotaged its good faith efforts to perpetuate endless war along its borders.

Vladimir Putin and other Russian officials left no doubt that its SMO will continue until their publicly explained objectives are achieved.

The US-created, Nazi-infested monster along Russia's border will  be neutralized and downsized to rump status.

Majority Russian speaking parts of its territory will likely either vote by referendums to join the Russian Federation or declare sovereign independence from Ukraine — a festering sore tyannical police state they want no part of.

On Monday according to Chechen leader aide, Apti Alaudinov:

Things are complicated because they're holding around 1,000 civilians hostage as human shields.

Based on how things are going, Alaudinov believes that captive civilians can be freed in a matter of days.

At that time, "full-scale" combat operations will either eliminate their Nazified captors or force them to surrender, adding:

"We plan to fix the problem of Severodonetsk's industrial zone within days"— liberating the area entirely from the scourge of Nazified occupation.

"As soon as (US-dominated) NATO stops arms supplies (for profiteering by their merchants of death, Zelensky and other Ukrainian officials will) run off within 24 hours" to where they stashed their hidden from public view riches abroad in foreign tax haven banks.

For him and other regime officials, "the current situation in Ukraine is another TV show."

"And if you took a shovel in your hands, for the first time in your life, that would be only to pose for a photo."

"(T)his year (most likely by fall), we will hold a referendum, and following (it) we will ask Russia's leadership for…membership" in the Russian Federation, adding:

"Russia is a nation that will allow (us) to have a future, a promising future of our own, while (Nazified) Ukraine" is colonized and controlled by US/Western regimes.

Their future lies with Russia, not Ukraine.

On Monday, according to the Donetsk News Agency:

In the last 24 hours, "Russian forces destroyed 11 Ukrainian MLRS batteries and 12 artillery batteries" in the republic.

They also eliminated "47 equipment and troops assembly areas, as well as a Buk-M1 missile system."

On Monday as well, Nazified Ukrainian forces "fired 320 rounds of ammunition of caliber over 12.7mm at" residential areas of Donetsk.

What continues daily is ignored by US/Western press agents for their ruling regimes.

Will continued Ukrainian cross-border attacks on Russia's territory, including on one of its Black Sea oil platforms — what could have been catastrophic by contaminating coastal waters fortunately avoided — get Moscow to respond by upping the stakes?

Russia hasn't shifted to full-scale warfare against the monster along its border.

Johnson explained that "if Russia…take(s) (its) gloves off and conduct(s) a full scale war on Ukraine, (large-scale numbers of its battlefield casualties so far) will pail in comparison" to what lies ahead.

At its discretion, Russia's Defense Ministry can turn Ukraine's infrastructure into smoldering rubble across the board.

For Moscow, what's going on is "existential."

Its forces defeated Ukraine's military decisively without eliminating it altogether.

No possibility exists for greatly degraded Kiev forces to turn things around.

According to Johnson, the way things were when WW II ended no longer exists.

Russia's SMO changed the rules of the game.

The empire of lies and perpetual wars on invented enemies can no longer "dictate the outcome in Ukraine and Europe."

"That power now resides with Vladimir Putin" and key Russian officials around him, Johnson explained.

Perversion of Reality on Russia and Ukraine

G7 Leaders Pledge Endless Money To Ukraine - 'As Long As It Takes'!

UK Economy Getting Crushed A Price "Worth Paying" For Freedom In Ukraine: Johnson