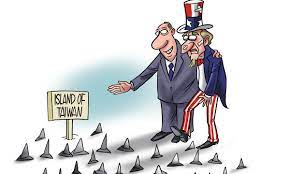 What hasn't been passed by Congress or enacted into law was one among other shots across the bow that moves toward undermining US relations with China by calling the country a threat to Taiwan and other US interests.

The Strengthen Taiwan's Security Act of 2022, introduced in late May, followed the same hostile pattern — as did earlier US legislation.

Driving another stake into the heart of normalized Sino/US relations, new legislation — combined with other US hostile to China measures — is another step toward undermining bilateral ties altogether.

More sanctions and additional hostile legislation are likely ahead, perhaps similar to all-out war on Russia by other means.

Menendez once again turned truth on its head, falsely accusing China of "seek(ing) to coerce and isolate Taiwan (sic)," adding:

"There should be no doubt or ambiguity about the depth and strength of our determination to stand with the people of Taiwan and their democracy."

"The danger will only grow worse if we show weakness in the face of Chinese threats and aggression toward Taiwan (sic)."

According to Graham's perversion of reality:

A nonexistent Beijing threat "will only grow worse if we show weakness in the face of Chinese threats and aggression toward Taiwan."

The measure's introduction followed the fake Biden's threat of war on China to defend Taiwan militarily if the empire of lies decides to push things this far.

Longstanding US one-China policy is dissolving in real time.

Calling Taiwan a "major non-NATO ally," the newly introduced measure calls for providing its ruling authorities with $4.5 billion in military funding over the next four years — to deter nonexistent "acts of aggression" by Beijing.

"Peaceful reunification (with Taiwan) is the greatest wish of the Chinese people, and we have the utmost sincerity and are willing to make greatest efforts to achieve that," adding:

"We are still making every effort with the greatest sincerities to deliver peaceful reunification now."

"Let me make this clear."

"If anyone dares to split Taiwan out of China, we will not hesitate to fight."

"Everything is under negotiation (with Beijing) including one China."

"I am lifting all (US) self-imposed restrictions" on Washington's one China policy.

Henceforth, US regimes "should consider all 'contact guidelines' regarding relations with Taiwan previously issued by the Department of State under authorities delegated to the Secretary of State to be null and void."

"Additionally, any and all sections of the Foreign Affairs Manual or Foreign Affairs Handbook that convey authorities or otherwise purport to regulate executive branch engagement with Taiwan via any entity other than the American Institute in Taiwan (AIT) are also hereby voided."

The Biden regime and Dem-controlled 117th Congress is following much the same policy.

"Taiwan is an inalienable part of the Chinese territory."

"The PRC government is the sole legal government representing the whole of China."

"The US made solemn commitments on the Taiwan question, and the one-China principle in three China-US joint communiques."

"It should stop engaging in political manipulation of Taiwan-related issues and containing China with the Taiwan question."

Along with billions of dollars in weapons, the Taiwan Policy Act of 2022 designates the island a Major Non-NATO Ally (MNNA).

The designation authorizes additional cooperation in areas of trade and security.

The empire of lies is playing with fire by its hostile policies toward Russia, China and Iran.

While it's unclear how far its willing to push things in attempting to advance its imperium, the risk of going too far against these countries or others is ominously high.

"Regardless of (whether Dems or Republicans control the White House and/or Congress), long-time practice for our representative office in the US (includes) hir(ing) public relations firms (lobbyists) to assist us in strengthening ties with the US."

The only thing surprising about her admission was publicly stating what most often is left unsaid.

According to a US OpenSecrets investigation, Taiwan's so-called Democratic Progressive Party (DPP) spent around $3.2 million for lobbying in 2017, Trump's first year in office.

After undemocratic Dems usurped power by brazen election fraud, Taiwanese lobbying focused on them over Republicans.

America's Military is Nearly Fully Dependent on China for Ammunition