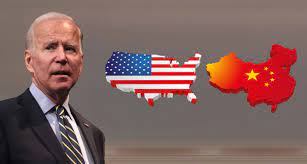 Since usurping power by the most brazen election fraud in US history, the illegitimate Biden regime and dominant Dem congressional hardliners redefined recklessness and venality domestically and worldwide.

Along with pushing mass extermination of unwanted billions by kill shots and using Ukraine as a platform for proxy hot war on Russia, its latest shoe to drop targeted China.

One China — the mainland and Taiwan — has been official US policy since Richard Nixon's February 1972 visit to Beijing.

At the time, a China/US Joint Communique followed his meeting with Chinese leader Mao Zedong and Premier Chou En-lai.

It laid the foundation for the US one-China policy.

On January 1, 1979, a second Joint Communique on the Establishment of Diplomatic Relations agreed to by Jimmy Carter and Deng Xiaoping formally established bilateral relations.

It officially ended US recognition of Taiwan, announced by Carter in December 1978."

"The (1992 Consensus) one-China principle affirms a single sovereign China comprised of the mainland and Taiwan."

To his shame and disgrace, Trump changed US policy toward China, saying:

"Everything is under negotiation (with Beijing) including one China."

"I am lifting all (US) self-imposed restrictions" on Washington's one China policy.

Henceforth, US regimes "should consider all 'contact guidelines' regarding relations with Taiwan previously issued by the Department of State under authorities delegated to the Secretary of State to be null and void."

"Additionally, any and all sections of the Foreign Affairs Manual or Foreign Affairs Handbook that convey authorities or otherwise purport to regulate executive branch engagement with Taiwan via any entity other than the American Institute in Taiwan (AIT) are also hereby voided."

The Biden regime apparently put an exclamation point on the above reversal of Washington's longstanding one-China policy by removing the principle from the State Department's website.

"The US (does) not support Taiwan independence" from the mainland.

"In the (February 1972) Joint Communique, the US recognized the government of the People's Republic of China as the sole legal government of China, acknowledging the Chinese position that there is but one China and Taiwan is part of China."

Deleting the above principle constitutes a virtual reversal of Washington's one-China policy — what stood the test of time for half a century.

"Taiwan is an inalienable part of the Chinese territory."

"The PRC government is the sole legal government representing the whole of China."

"Facts cannot be denied, and right and wrong should not be distorted."

"The US made solemn commitments on the Taiwan question, and the one-China principle in three China-US joint communiques."

"The (Biden regime's) latest modification of the fact sheet is a trick to obscure and hollow out the one-China principle."

"Such political manipulation of the Taiwan question and the attempt to change the status quo across the Taiwan Strait will hurt the US itself."

"The US should abide by the one-China principle and the stipulations of the three joint communiques, follow through on the political commitments on the Taiwan question it made to China, and fulfill (the Biden regime's earlier) statement that the US does not support 'Taiwan independence' with real actions."

"It should stop engaging in political manipulation of Taiwan-related issues and containing China with the Taiwan question."

"The US has a longstanding one China policy, which is guided by the Taiwan Relations Act, the three US-China Joint Communiques, and the Six Assurances."

"Taiwan has become an important US partner in trade and investment, health, semiconductor and other critical supply chains, investment screening, science and technology, education, and advancing democratic values."

The notion of "Six Assurances" was mentioned for the first time.

They refer to Reagan-era assurances regarding US arms sales to the island, stating:

The US has not agreed to set a date for ending arms sales to Taiwan.

It has not agreed to consult with the PRC on arms sales to Taiwan.

Nor will it play a mediating role between Taipei and Beijing.

It did not agree to revise the Taiwan Relations Act (TRA).

Nor did it alter its position regarding sovereignty over Taiwan.

It will not exert pressure on Taiwan to enter into negotiations with the PRC.

By joint resolution in 2016, the US House and Senate affirmed the Six Assurances and TRA as cornerstones of US/Taiwan relations.

The 1979 TRA terminated formal US diplomatic recognition of Taiwan.

"It "maintain(s) strong, unofficial relations with Taiwan…in line with (its) desire to further peace and stability in Asia (sic)."

It's committed "to assist Taiwan in maintaining its defensive capability" at a time when its only enemies are invented.

Affirming the US one-China policy, a Beijing statement said:

Its leadership "opposes official and military ties in any form between the US and the Taiwan region, and opposes US interference in China's internal affairs."

"No country and no one should underestimate the resolve, the will, and the ability of the Chinese people to defend their national sovereignty and territorial integrity."

Since at least 2020 and likely earlier, a US "special operations unit" has been training Taiwan forces in breach of the one-China policy and TRA.

Earlier this year, Beijing's US envoy, Qin Gang, called "(t)he Taiwan issue the biggest tinderbox between China and the US," adding:

"If the Taiwanese authorities, emboldened by the US, keep going down the road for independence, it most likely will involve China and (hegemon USA), the two big countries, in a military conflict."

Are they heading for global war in Europe and the Pacific?

Will their rage to control planet earth, its resources and populations kill us all?

I tremble at the prospect of possible global war, including possible use of tactical nukes — where things may be heading.

Days earlier I stressed that if used in enough numbers, armageddon will surely follow.