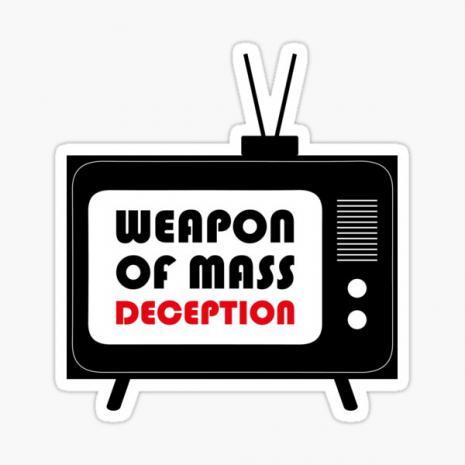 Like every Sunday morning — and all other days of the week — state-approved propaganda TV fear-mongering fake news on kill shots and all else flu/covid related is featured.

On the most important issue of all time — and all other important ones — truth and full disclosure are banned.

Saying "case numbers (of more scariant than variant omicron) are high…hospitals struggling" failed to explain that the vast numbers of patients were jabbed or multi-jabbed.

Saying the Biden regime "made a lot of progress on testing" failed to disclose the frequency of false positive results, rendering them invalid.

"If the solution contacts the skin or eye, flush with copious amounts of water. If irritation persists, seek medical advice…"

The harmful chemical is sodium azide.

According to CDC Facts About Sodium Azide:

It's "a rapidly acting, potentially deadly chemical that exists as an odorless white solid."

It "prevents the cells of the body from using oxygen."

"When this happens, the cells die."

What Murthy failed to explain is crucial for everyone to know.

Instead, he and likeminded Biden regime fraudsters come on air to push what's harming health over what's crucial to protect it.

Saying jabs "are working to keep people safe, to keep them out of the hospital, to save their lives (sic)" is debunked by peer-reviewed science.

Saying "(w)e need to get millions more people boosted" is all about pushing greater harm to health than already inflicted by jabs and double-jabbing.

The way to protect against seasonal flu — now deceptively called covid — is by shunning jabs and hazardous to health at-home test kits.

It's by following a healthy lifestyle.

It's by ignoring harmful to health advice from the likes of Fauci, Walensky, Murthy, other US anti-public health fraudsters, Pharma and their MSM press agents.

It's by no longer going along passively with what no one should tolerate.

Mass-jabbing with kill shots should be a criminal offense codified into law.

The "mRNA (jabs) and DNA vector (jabs) may be a pathway to crippling disease sometime in the future."

"Through the prion-like action of the spike protein, we will likely see an alarming increase in several major neurodegenerative diseases, including Parkinson's disease, CKD, ALS and Alzheimer's…"

"(T)hese diseases will show up with increasing prevalence among younger and younger populations, in years to come."

"(W)e won't (be able to link debilitating/disabling diseases to kill shots) because there will usually be a long time separation between (jabbing) and the disease diagnosis."

Pharma will be able to continue cashing in big on a bonanza of profiteering while remaining unaccountable for unprecedented harm to countless millions of people throughout the US/West and elsewhere.

Instead of explaining the above, the likes of Fauci, Walensky and Murthy et al suppress what's crucial for everyone to know.

Shun their health-destroying, mind-manipulating rubbish to protect what's too precious to lose.

You Need Physical Training to Improve Your Chances of Survival