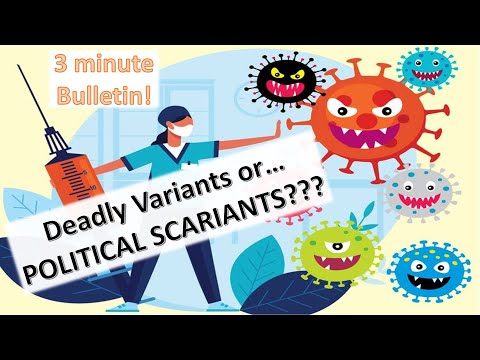 New more scariant than variant omicron was rolled out by US/Western dark forces in southern Africa to accelerate their diabolical mass-extermination/freedom destroying plans.

On Friday, the imposter in the White House read the following lines scripted for him to recite via teleprompter, saying:

Non-US citizens who've been in one or more of these countries for two weeks or longer are banned from entering the US.

Other travel restrictions from Africa to the US were imposed.

More of the same that apply to additional countries on the continent may be added to the above-named ones.

Draconian ones in all forms have nothing to do with protecting public health as falsely claimed.

They're all about snuffing out what remains of fundamental freedoms — full-blown tyranny planned to replace them.

Cutting to the chase, the fake

"(N)ews about this new (more scariant than) variant should make clearer than ever why this pandemic (of the jabbed alone) will not end" as long as kill shots continue to be administered to the unwary.

They're promoted on the phony pretext of protecting public health.

Ignored by MSM is that US/Western dark forces are going all-out to destroy it along with what remains of free and open societies worldwide.

The more scariant than variant omicron is spreading at "a reasonably rapid rate (sic)."

It's more widespread than previously thought, showing up in Hong Kong, Britain, Belgium, the Netherlands and Germany.

"There's no indication" that it's in the US at this time.

Make no mistake. It's on its way to arrive at a time and place that's planned by US dark forces.

It "might evade an immune response (sic)," said Fauci.

He raised a "red flag"of alarm for maximum fear-mongering impact.

"As soon as we find out more information, we'll make a decision as quickly as we possibly can" about imposing more draconian restrictions.

"That's the reason why we're rushing now to get that scientific data to try and make an informed decision," Fauci said, adding:

It may evade kill shots being administered.

So re-mass-jabbing the already jabbed may be called for to accelerate their demise.

Saying "everything" is being done "to protect the American public" is polar opposite what's going on.

According to NYT fake news,  omicron's mutations "may allow it to spread quickly…even among the" jabbed (sic).

In response to sacking or suspending tens of thousands of state healthcare professionals and staff over their unwillingness to sacrifice health as a condition of employment, NY governor Kathy Hochul declared a self-inflicted state of emergency last September.

On Friday, she was at it again, signing a health-destroying executive order.

It virtually banned elective surgeries by postponing them as long as outbreaks continue because of no end to mass-jabbing.

Turning truth on its head, she said:

Her regime took this "extraordinary action to prevent the spread of (flu/covid) by increasing it with continued administering of kill shots.

Saying her action also aims to "combat this pandemic" left unexplained that it exists among the jabbed alone.

Adding that "while the new (more scariant than variant) omicron…has yet to be detected in New York State, it's coming," she said.

Yes indeed! Biden regime hardliners will surely include the empire state in its omicron fear-mongering campaign.

Hochul may already have been briefed on the arrival of the new scariant.

Saying toxic mass-jabbing "remains one of our greatest weapons in fighting" what's going on ignored that its aim is all out proliferating it with inflicting maximum harm on maximum numbers of New Yorkers in mind.

She encouraged all eligible state residents to get jabbed and booster-jabbed — for maximum public health destruction she left unexplained.

Her latest draconian mandate is effective on December 3.

It'll be reevaluated on January 15, most likely to remain in force throughout winter months or longer.

Along with the US, EU countries, Britain, Australia, Japan, Canada, and other nations imposed restrictions on travel from southern Africa.

"One of the key factors to emergence of variants may well be low (jabbing) rates in parts of the world (sic), and the WHO warning that none of us are safe until all of us are safe (sic)" by having been fully-jabbed with toxins designed for maximum harm, not for protection.

Britain and everywhere else.

In Chicago where I live, public health commissioner Allison Arwady said her department is monitoring omicron and is "prepared to take action to protect the health of Chicagoans (sic)."

Which States Are the Freest?

Who Will Save You From This Insane Tyranny? Only You Have the Power to Save Yourself

Kachelman: Those Crying Out "Conspiracy" Are the Ones Who Need to be Arrested...