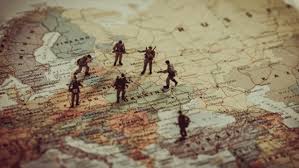 Throughout its over-three decade history, the Russian Federation never attacked or threatened another country.

It's the world's preeminent champion of world peace and stability, according to the rule of law.

Its policies on the world stage are polar opposite how hegemon USA and its imperial partners operate — prioritizing forever wars on invented enemies, abhorring peace, consistently and repeatedly breaching the rule of law in pursuit of diabolical aims.

Russia "never planned (and) never will" invade Ukraine or any other countries.

As permitted by the UN Charter, Russia and other nations have a legal right to protect and defend their national security against belligerence by or threats from other countries.

As for deployment and movement of Russian forces in its own territory, "(w)e have the right to concentrate (them) wherever we want," Polyansky stressed, adding:

"If you read the threats, concrete threats that are being pronounced by Ukraine against Russia, against Russian territorial integrity, then you will understand that certain precaution is a logical step in such a situation."

They continue with disturbing regularity.

Throughout much of this year, NYT fake news claimed repeatedly that Russia is preparing for war on Ukraine (sic)."

Late last week, it featured the Big Lie again, falsely claiming that US and UK intelligence "are increasingly convinced that Putin is considering military action to take control of a larger swath of Ukraine, or to destabilize the country enough to usher in a more pro-Moscow government (sic)."

Of course, no evidence was cited. How can what doesn't exist be explained?

Like other MSM, the Times is a notorious lying machine on virtually all major issues.

No evidence remotely suggests that Russia intends hostilities against Ukraine or any other countries.

Indisputable evidence shows that Russia prioritizes peace, stability and cooperative relations with other countries — in stark contrast to hegemon USA's aim to smash and control ones unwilling to bend to its will.

According to the Military Times (MT) last weekend:

"Russia has more than 92,000 troops amassed around Ukraine's borders and is preparing for an attack by the end of January or beginning of February (sic)."

Citing Ukrainian war ministry's Kyrlo Budanov, MT reported that an "attack would likely involve airstrikes, artillery and armor attacks followed by airborne assaults in the east, amphibious assaults in Odessa and Mariupul and a smaller incursion through neighboring Belarus (sic)."

Like virtually always when MSM report fake news about Russia, no evidence is cited because there is none.

Budanov's litany of bald-faced Big Lies didn't quit, falsely claiming a buildup of Russian forces in Crimea, along with positioning short-range ballistic and other heavy weapons along the border with Ukraine in preparation for war (sic).

More of the same rubbish followed.

It's crystal clear. No such attack is on the table.

"All available information indicates that the armed forces of Russia permanently sustain a powerful offensive grouping around Ukraine (sic)."

"We continue to see unusual military activity inside Russia, but near Ukraine's borders, and we remain concerned about that (sic)."

"(I)t's not exactly clear what the Russian intentions are (sic)."

"We obviously would like to better understand that (sic)."

"(W)e don't want to see any action further destabilize what is already a very tense part of the world (sic)."

"(W)e urge Russia to be clear about their intentions and to abide by their Minsk agreements."

Russia and Donbass fully support them, along with the rule of law overall.

The Obama/Biden, Trump and fake Biden regimes breached the letter and spirit of the conflict resolution agreements.

"Putin could be weighing an invasion early next year as his troops again mass near the border (sic)."

"The information lays out a scenario where troops would cross into Ukraine from Crimea, the Russian border and via Belarus, with about 100 battalion tactical groups — potentially around 100,000 soldiers…for a potentially prolonged occupation (sic)."

"The Russian leader has a history of brinkmanship and prior buildups on the border (sic)."

"(H)ysteria is being built up artificially."

"The ones who are accusing us of some kind of unusual military activity on our own territory are themselves sending their armed forces from across the ocean."

Separately, Moscow-based expert on Russia's relations with the US and West Dmitry Suslov said the Biden regime in cahoots with its European partners are preparing more illegal sanctions on Russia.

MSM claims that Moscow is preparing to attack and invade Ukraine don't rise to the level of bad fiction.

WaPo: "Putin is testing US, NATO with buildup along Russia-Ukraine border (sic)"

WSJ: "For Putin, the Great Prize Has Always Been Ukraine (sic)"

CNBC: "The world is worried Putin is about to invade Ukraine (sic)"

The above is a small sample of rubbish MSM feed viewers and readers — truth and full disclosure banned!

Lavrov/Blinken Meeting Much Ado About Nothing

Nothing Is Off the Table