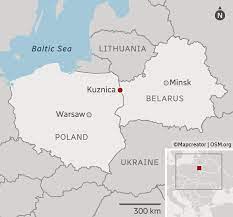 According to MSM fake news, Belarusian President Alexander Lukashenko is to blame for the refugee situation along the country's border with Poland — what he had nothing to do with.

The NYT defied reality by calling what's going on "Lukashenko's…calculated…revenge" — falsely blaming him for the fallout of US/NATO aggression.

According to WSJ fake news, Lukashenko "is turning thousands of migrants into pawns in a standoff" with the EU (sic).

CNN falsely accused him of "manufacturing the migrant crisis on the border (with) neighboring Poland (sic)."

According to UK-owned and controlled BBC fake news, "Belarus…lur(ed) migrants to Minsk with the false promise of easy entry to the EU (sic)."

What MSM suppress on all major issues is most important for everyone to know.

According to Biden regime fake news — signed onto by subservient G7 vassal states:

The G7 "condemn(s) (Lukashenko's) orchestration of irregular migration across its borders (sic)."

"These callous acts are putting peoples' lives at risk (sic). "

"We are united in our solidarity with (US-colonized) Poland…Lithuania and Latvia (sic)."

Saying they've "been targeted by this provocative use of irregular migration as a hybrid tactic" is a bald-faced Big Lie fooling no one.

US-dominated NATO bears full responsibility for the rape and destruction of one country after another since the Clinton crime family dismantled and smashed the former Yugoslavia in the 1990s.

All of the above created the largest-scale refugee crisis since WW II.

Many sought refuge in EU countries, including migrants along the Belarusian/Polish border.

Time and again, hegemon USA and controlled partners falsely blame targeted independent nations for their own crimes of war, against humanity, atrocities and other wrongdoing.

On all things ongoing in central Europe, Russia and Belarus are falsely blamed for what they had nothing to do with.

Interviewed by Britain's BBC — an operation that spurned journalism as it should be from inception — Lukashenko debunked its fake news with straight talk.

His government gave its production team full access to where refugees are located along the border with Poland.

He answered BBC interviewer Steven Rosenberg's questions for about an hour.

In response to fake news claims, he set the record straight as in other interviews and separate remarks about what's going on along Poland's border with Belarus.

Ducking no questions, he responded forthrightly, sticking to indisputable facts.

Based on documented evidence, he explained brutality by Polish security forces.

Instead of providing humanitarian aid, including to women and children, they attacked refugees with tear gas, stun grenades, beatings, and toxic chemicals fired by water cannons.

All of the above was recorded on videotape and was gotten from testimonies by victimized refugees.

"The vast majority of (2 or 3 thousand refugees) asked the Poles to transit (them to) Germany."

"A Polish officer (said) that they need to go to the checkpoint and submit applications, and that the Polish authorities would consider them and so on."

"In other words, he actually sent them to that border checkpoint."

"They all left (the forest area where they were located) and rushed there."

Claiming they assaulted Polish security forces with "stones and sticks" was a bald-faced Big Lie.

"They got this understanding that the Polish guards would let them across and that they would take their applications."

"They…apologized for all the trouble, and asked to be let through. But they were not."

"That's where it all that started. The Poles used water cannons (and other harsh treatment) in violation of all rules and regulations."

"What have we learned today? We have established that they used pesticides and herbicides."

"These are the substances you use to kill cockroaches and weeds."

"We can prove this because we have evidence."

"Do you know that you can't even point your weapons towards the neighboring territory?"

"Why did they douse water with toxic chemicals 100 meters into our territory?"

"It is a violation of the state border."

"I am telling you that as a former border guard. I was stationed at that border."

"They've at least violated the state border. They threw flash grenades into our territory."

"They acted like fascists. As people were sleeping under the open sky, they used flashlights, sirens, and so on."

"They flew a helicopter. The investigators reported that they used tear gas, water, toxic chemicals, and helicopters flying at a low altitude."

"What for? So that the helicopter's propeller would send those toxic chemicals deeper into our territory, to reach children."

"Why didn't the BBC report" all of the above?

Why did it fail to explain this to UK viewers?

Why does it exclusively feature state-approved propaganda instead?

Why are its fake news reports similar to US and other MSM rubbish?

Asked why the EU doesn't deal with him like most other European countries, Lukashenko said the following:

"I can answer why it is difficult for you to talk to me."

"Because I don't dance to your tune. I pursue an independent policy."

"Independent from you and from anyone else – from Americans, the English, and the European Union. I  (serve) my nation."

"Can you say I've bothered my neighbors?"

"Did we make any problems for (Poles,) Lithuanians or Latvians? Never."

"Why did you come into our house and try to destroy it last year?"

"Why? What business of yours is our election?"

"We didn't meddle with the UK or America."

"You financed a mutiny last year. You did!"

"You controlled the mutiny from Poland's territory. You did. With Americans' backing."

"You came into our house. We didn't call for you."

Belarus is not the source or cause of refugees along its border with Poland.

The UN High Commissioner for Refugees and the International Organization for Migration Filippo Grandi sent "his warm greetings to…Lukashenko."

They "agreed to maintain contacts in the future."

They'll report fully, objectively and impartially…about the events" on the border with Poland.

On Friday, head of the Russian/Belarusian Union State Standing Committee, Marianna Shchetkina, called millions of refugees from US/NATO wars "the crime of the century."

Are hegemon USA and its EU partners pushing for unthinkable war with Belarus and Russia?

Along with the UK and apartheid Israel, do they have WW III in mind, including by attacking Iran?

Dominant Biden regime and congressional Dem hardliners are more ruthlessly dangerous than the worst of their predecessors.

With them empowered, the unthinkable is possible.