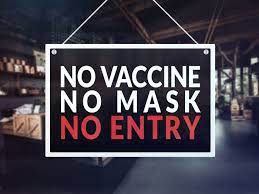 All things flu/covid threaten everyone yearning to breath free from the draconian scourge unveiled last year with the worst of diabolical aims in mind.

Resistance is the only option against fast-approaching full-blown tyranny if not challenged and checked by whatever it takes to prevent US/Western states from becoming ruler/serf societies — their populations culled to eliminated countless numbers of unwanted people.

With the same thing planned worldwide, mass rebellion is the only viable option.

Never before in modern memory has state-sponsored, MSM supported draconian policies done more harm to more people in a matter of months than since seasonal flu was deceptively renamed covid last year.

Toxic flu/covid jabs are all about destroying health on the phony pretext of protection from a pandemic that doesn't exist.

All things flu/covid are all about ending what remains of free and open societies everywhere — ruthless subjugation replacing them.

Noncooperation with evil is fundamental.

When ordinary people no longer tolerate what harms them by undermining their rights and welfare, all things are possible.

In response to a draconian mandate by Southwest Airlines for their employees to be jabbed for flu/covid protection impossible to get from toxic kill shots, mass resistance followed.

Thousands of flights were cancelled for lack of enough crews to man them.

According to an internal memo obtained by CNBC, the channel reported the following on Tuesday:

"Southwest scrapped a plan to put un(jabbed) workers with pending exemptions on unpaid leave after the Dec. 8 deadline."

"Southwest's senior vice president of operations and hospitality, Steve Goldberg, and Julie Weber, vice president and chief people officer, wrote to staff on Friday that if employees' requests for an exemption haven't been approved by Dec. 8, they could continue to work while following mask and distancing guidelines until the request has been reviewed."

"This is a change from what was previously communicated."

"Initially, (the airline) communicated that these employees would be put on unpaid leave…(T)hat is no longer the case."

While company management continues to yield to Biden regime pressure for mass-jabbing their staff, the latter won round one in their battle to stay free from jabs designed to destroy their health.

Based on how the airline softened its mandate, holding firm by staff will kill it altogether ahead.

If enough Americans in all walks of life refuse to comply with health and freedom-destroying mandates by government at all levels, businesses, and management of other operations, they'll yield in lieu of not being able to function normally for an extend time.

In the case of businesses, they'll risk possible bankruptcy if enough staff resist what no one should tolerate and hold firm.

Shutting down or greatly compromising normal operations is the most effective way to get governments, businesses, and other private initiatives to yield under unwavering pressure.

Ruling authorities are only as powerful as their rank and file permit.

When they cross the line to what's unacceptable, the only option is to Just Say No and not yield to what harms health and fundamental rights.

That's how social justice triumphs over the what's intolerable.

Nothing matters more to businesses than pocketbook issues.

For politicians, it's getting reelected.

For them and bureaucrats, it's having enough staff to maintain essential functions, notably to prevent chaos from displacing law and order.

For ordinary people, it's freedom from draconian harm to their health and rights, the ability to support their families, and enjoy at least enough of what they most value — free from what risks disruption or loss of the above.

The alternative is destruction of public health, elimination of fundamental freedoms, and modern-day enslavement for survivors under tyrannical rule.

What no one should tolerate demands putting our bodies on the line against ruthless dark forces with the worst of diabolical aims in mind — and not yielding until their pure evil agenda is smashed.

WHO: Omicron In 38 Countries, No Deaths Reported