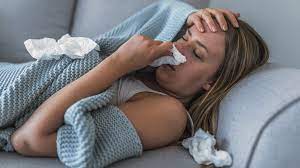 According to the state-owned and controlled BBC, about 86% of Brits over age-12 were jabbed for flu/covid, 79% double-jabbed.

While the above numbers are likely inflated, Britain is one of the world's most heavily jabbed and rejabbed countries.

In stark contrast, they declined 22% among unjabbed Brits during the same timeframe.

Nations with most of their people jabbed are experiencing the greatest surge in cases, serious ones and deaths — the great majority affecting the jabbed.

On October 19, even the pro-toxic mass-jabbing NYT reported the following:

Reported outbreaks in Britain are surging.

"Cases have increased by 30 percent from the average two weeks ago."

"Deaths have increased by 11% (among) infected" Brits, according to officially inflated data.

The vast majority were jabbed and double-jabbed, not the other way around, what the Times suppressed.

Deaths from the viral illness overwhelmingly affect the jabbed and/or individuals dealing with other life-threatening issues.

On October 17, Bloomberg News reported a surge in UK outbreaks — falsely blaming it on more scariant than variant delta.

It's no more potentially deadly or transmissible than other viral strains.

Differences among them are too insignificant to matter.

On Monday, CNBC said Britain is reporting "one of the worst daily infection rates in the world."

All of the above have nothing to do with surging outbreaks.

About 6.5 million Brits are eligible for booster jabs. According to Britain's National Health Service, 3.6 billion boosters were administered.

What's unexplained is that the above is what's causing a surge in outbreaks.

As jabbing further increases in Britain and elsewhere, so will numbers of infections.

Not according to Pharma-linked/former FDA commissioner Scott Gottlier, tweeting the following fake news:

"We need urgent research to figure out if this delta plus is more transmissible, has partial immune evasion (sic)" — two bald-faced Big Lies in one brief tweet.

The above in response to surging flu/covid outbreaks in Britain ignored the high rate of jabbing as the cause.

Much the same is happening in all heavily jabbed countries.

Gottlieb and others connected to Pharma understand what's going on and why.

What they won't say is most important.

Bloomberg reported that Gottlieb's tweet came "as the UK reported the highest daily jump in new cases on Sunday since mid-July."

Like Gottlieb and other MSM, Bloomberg failed to say that surging outbreaks largely occur in jabbed Brits.

Gottlieb is a Pfizer board member. He's also a partner at the venture capital firm New Enterprise Associates and is a neocon American Enterprise Institute member.

The greater the number of jabs administered, the more he likely profits — at the expense of irreversible harm to jabbed individuals.

Ireland's Waterford and Carlow counties with nearly all of their eligible residents jabbed are experiencing a huge surge in outbreaks.

There's no ambiguity why this is happening.

It's repeated time and again in heavily jabbed nations and local communities by design.

What's unreported by MSM is that it's caused by toxic jabs.

Instead they falsely blame the unjabbed for what hammering their toxic jabbed counterparts.