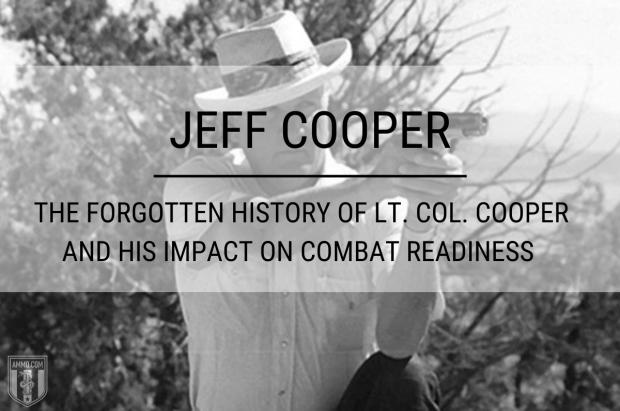 Jeff Cooper: The Forgotten History of Lt. Col. Cooper and his Impact on Combat Readiness

The United States Marines have a saying: "Every Marine a rifleman." That being said, some of them are pretty handy with a pistol, too.

Lt. Col. Jeff Cooper literally wrote the book on modern handguns in combat. In fact, you're probably already acquainted with a number of concepts he introduced to the world of pistols, even though you might not know his name. Some of them are so common sense and simple that it's hard to believe anyone had to invent them.

This was the genius of Jeff Cooper.

During World War II he served in the Pacific Theater, earning the rank of major. In 1949, he resigned his commission, but duty called during the Korean War and so, Cooper returned. He served in irregular warfare and earned a promotion to Lieutenant Colonel. After the war, he applied to remain on active duty but was rejected.

From there, Cooper earned a master's degree in history and taught part-time at a high school and a community college. Here he remained until the early 1970s when he applied his passion for teaching to his passion for weapons.

It was in 1976 that Cooper founded the American Pistol Institute, now known as the Gunsite Academy. While he primarily taught rifles and shotguns to law enforcement, the concepts developed by Cooper during his time running the American Pistol Institute for pistols and long arms alike are used by every intelligent and responsible gun owner to this day.

It was at the American Pistol Institute that Cooper developed the modern technique of the pistol. This was his system for pistol combat. Without knowing what it's called or who invented it, much of it will seem familiar to you:

Large caliber, semi-automatic pistol: Cooper was an early advocate of the 1911 and a big caliber to go in it. At a time when most men favored wheel guns, Cooper believed there was simply no substitute for a semi-automatic with a big round like a .45 ACP.

The Weaver stance: Opinions vary on the best stance for combat, but Cooper was a strong supporter of the Weaver stance, developed by Los Angeles County Deputy Sheriff Jack Weaver through his experiences in competitive shooting.

The draw stroke: Cooper preached the importance of the draw stroke. A holstered weapon doesn't do anyone any good. So Cooper drilled his students to consistently practice drawing their weapon with perfect form to be combat-ready.

All of the above are basic combat training for civilians, military, and law enforcement alike. While Cooper didn't "invent" any of it, per se, he synthesized previously existing methods into a cohesive program of combat readiness just about anyone could learn.

Condition 4 is when the chamber is empty, there is no magazine in the gun, the hammer is down, and the safety is on.

Condition 3 is after a full magazine has been loaded.

Condition 2 is after a round is chambered.

Condition 1 is after the hammer is cocked.

Condition 0 is when the safety is released.

Condition 0 is when the weapon is fully ready to fire, requiring only an operator to pull the trigger. Condition 1 would not apply to hammerless semi-automatics, but as Cooper was a 1911 aficionado, he included a step for cocking the hammer.

In addition to the condition of the weapon, Cooper also formulated a system for appraising one's personal readiness for combat, using a color-coded system:

White represents a total lack of situational awareness. You are completely surprised by your attacker and relying upon his ineptitude to save you.

Yellow is simply a vague awareness that the world is a sometimes dangerous place where you might have to defend yourself using deadly force. You are appraising situations for danger all around you. Cooper described this as "I might have to shoot."

Red is combat. You have identified a deadly threat to yourself or your loved ones and are about to begin shooting.

The United States Marine Corps used this system but added a code black which means that combat is in progress or you are too paralyzed by fear to act. Cooper never used this level in his system.

This threat level assessment system is an elegant way to check to see how we are appraising situations in potential combat. For those who carry on a regular basis, it is absolutely essential to evaluate the threat level at all times and to train oneself for situational awareness. Cooper later simplified his explanations of the color codes, but the basic framework remained in place.

Finally, one of the first things anyone learns about guns is basic firearms safety: Treat all guns as if they're loaded, never point them at anything you don't want to destroy, finger off the trigger until it's time to shoot, and lastly, know your target and what's behind it. We have Cooper to thank for this simple and elegant method of gun safety that has saved untold lives and prevented countless negligent discharges.

Jeff Cooper and the Scout Rifle

Cooper is heavily associated with pistols, but as a Marine, he would have been extremely proficient with a rifle as well. He went so far as to call the rifle the "queen of personal weapons."

Beautifully explaining the amoral character of the rifle and firearms in general, Cooper once wrote: "Naturally, it may be used by evil men for evil purposes, but there are more good men than evil, and while the latter cannot be persuaded to the path of righteousness by propaganda, they can certainly be corrected by good men with rifles."

Cooper's thoughts on the rifle drove his development of the scout rifle.

Cooper gave much thought to what would make a perfect rifle. He believed the perfect personal protection weapon was "a short, light, handy, versatile, utility rifle." Specifically, this would be a bolt-action rifle chambered for .308 Winchester, total length under one meter (about 39 inches), lighter than three kilograms (about six and a half pounds), with both iron sights, and a forward-mounted optical sight, fitted with a sling of some kind.

In 1997, Cooper's dream finally saw fruition when Steyr Arms (then Steyr Mannlicher AG) developed the first commercially available scout rifle. Cooper was involved in the entire engineering, design, and production process. Cooper famously owned one, which is considered a significant achievement in the world of long arms. The original scout rifle was heavily copycatted by the entire arms industry.

Cooper was also the father of a number of rifle calibers. He wanted a bigger bore round for one-shot kills on big game. His quest for this was known as the Thumper concept and inspired the creation of a number of rounds, such as the .450 Bushmaster, .458 SOCOM, .499 LWR, and the .50 Beowulf.

In addition to teaching, Cooper also had a passion for writing about firearms and politics. He had a way with words and his ability to simply and elegantly explain concepts makes for great reading.

Cooper coined the term hoplophobia to refer to an irrational fear of firearms. He wrote a series of memoirs detailing his adventures both in the military, in firearms instruction, and in big game hunting. He had a regular feature in Guns & Ammo called "Cooper's Corner," which can be read in his collection, The Gargantuan Gunsite Gossip.

He also did a fair bit of writing about politics and to describe Cooper as an arch-conservative is perhaps the understatement of the year. His direct and unconventional takes on the issues of the day included a claim that 90 to 95 percent of people who died in urban gunfights were "any loss to society." In 1994, Cooper wrote that "[Los Angeles and Ho Chi Minh City]... are both Third World metropolises formerly occupied by Americans." He was an outspoken supporter of Rhodesia, UNITA leader Jonas Savimbi and Spanish caudillo Francisco Franco.

This American original died at his home on September 25, 2006, at the age of 86 after 64 years of marriage to his wife Janelle. If you're ever in Paulden, Arizona, give him a visit.

Jeff Cooper: The Forgotten History of Lt. Col. Cooper and his Impact on Combat Readiness originally appeared in The Resistance Library at Ammo.com.

I'm 71 years old and have never heard her name.

Righteousness + Force in America: The Trap of Righteous Activism Coupled with State Power

America's "Days of Rage": The Extensive Left-Wing Bombings & Domestic Terrorism of the