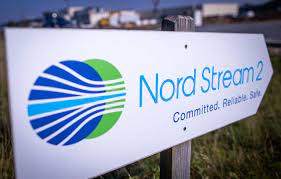 NDAA Amendment for More US Sanctions on Russia's Nord Stream 2

On September 23, US House members continued forever war on Russia by other means.

It mandates sanctions on foreign entities and individuals involved in planning, constructing, and operating Russia's Nord Stream 2 gas pipeline to Germany and Europe — what only Security Council members may legally impose, not one country on others.

The NDAA amendment circumvents the Biden regime's national interest waiver to avoid sanctioning the pipeline that's vital to the energy security of Germany and other European countries.

If the House amendment is included in the Senate's NDAA version when passed and signed into law by Biden's double, more sanctions on Russia and others involved in the project will follow.

Nord Stream 2 is a hot-button issue for both wings of the US war party.

It's part of longstanding US war on Russia by other means for not bowing to the will of a higher power in Washington.

It's also because sales of Russian gas to Europe come at the expense of US LNG producers.

Moscow's gain is their loss.

Along with Russia, Germany stands to be the main beneficiary of the project that will greatly aid its energy security and economy.

No credible evidence supports the phony claim by US hardliners that the pipeline lets Moscow harm Ukraine's energy security, along with Germany becoming more dependent on Russian gas to its detriment.

Unlike hegemon USA, Russia is a good neighbor.

It's a reliable political, economic and trade partner, as well as a dependable supplier of energy to European and other markets.

At a time of high energy prices, plentiful Russian gas is a way to check them from soaring much higher by supplying as much as Germany and other countries need to buy.

"We are not ready yet to accept only renewable energy on the global scale."

"That's why the balance between supply and demand is disrupted."

"That's the main reason that gas prices are going up."

What Moscow can supply through Nord Stream 2 provides the best chance to stabilize prices and lower them.

At a meeting on energy development this week, Vladimir Putin said Russia is prepared to increase the amount of gas it supplies to nations seeking to buy it.

He stressed that Russia has done nothing to spike prices much higher.

"(S)peculative frenzy is of no use to us," he added. Stability benefits buyers and sellers alike.

According to Gazprom, European gas reserves are at their lowest level in years.

Certifying Nord Stream 2 is required before it becomes operational.

Ahead of approaching cold weather months, it's important for Germany and Europe to speed the process so Russian gas can be supplied through the pipeline as soon as possible.

Novak explained that this benefits suppliers and buyers, along with making the price of gas cheaper than without what Nord Stream 2 can provide.

Russia scrupulously fulfills its contractual obligations with European and other buyer markets.

It had nothing to do record-high gas prices. Phony claims otherwise persist, notably by US hardliners, including Biden regime national security advisor Jake Sullivan, falsely saying:

Unjustifiably scapegoating Russia over the issue is no way to solve the problem.

With the world's largest natural gas reserves, greater reliance on them is a way to lower prices and stabilize markets in the months ahead.

When operational, Nord Stream 2 will potentially double the export amount of Russian gas to European markets.

Russia building a sovereign Internet -- with help from Apple, Google