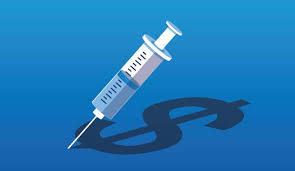 Endless repetition is warranted to counter a daily blitzkrieg of MSM proliferated fake news about all things flu/covid — based on state-approved talking points.

What's suppressed in cahoots with US/Western dark forces and Pharma profiteers is what's most crucial for everyone to know.

According to information published by mercola.com, US war department data — now removed from public view online — revealed the following:

"Breakthrough infection rates five to six months post-(jabs) are twice as high as three to four months" after being fully inoculated for protection not gotten.

Separately, UK Office for National Statistics (ONS) data show that over 80% of flu/covid deaths among Brits in August and September were fully-jabbed individuals.

Over 30,000 deaths occurred within three weeks after toxins were injected into their bodies.

Mass-jabbing causes outbreaks and deaths instead of claimed protection not gotten.

It increases in proportion to numbers of people jabbed, double and booster-jabbed.

The more gotten, the greater risk of serious illness and death over the near-term or later on.

Outbreaks and deaths are highly likely to increase during cold weather months ahead to May.

Fake news no doubt will blame them on being unjabbed when reality is overwhelmingly the other way around — based on indisputable science.

Is resistance against what no one should tolerate showing up in larger numbers.

Tens of thousands of US healthcare professionals and staff are being sacked or suspended for refusing to sacrifice health as a requirement for employment.

A same-day article discussed  "hundreds of thousands" of refuseniks among US military service members as reported by WaPo.

On Sunday, Infowars.com said US airlines are suppressing numbers of mass-jabbing refuseniks.

Thousands of flights were cancelled for lack of enough jabbed crews to man them, adding:

What's going on has nothing to with protecting against viral illness.

It's all about "some type of totalitarian takeover that's occurred all over the world. Something very dark is going on."

Stressing an "unbelievable atrocity" throughout the West, he urged resistance against "willful misconduct" of public health officials and supportive MSM.

Addressing the American Association of Physicians and Surgeons on October 2, he explained that he "chaired Data Safety Monitoring Boards (DSMB) for over two dozen therapeutic products."

Comprised of clinical research experts like himself, he explained that they're charged with "monitor(ing) progress of clinical trials, (along with) review(ing) safety and effectiveness of data while" ongoing.

DSMB members can call for trials to be halted over "participant safety" concerns.

When serving as a DSMB chairman, McCullough called for shutting down trials when deemed unsafe, he explained, adding:

When "five unexplained cases" are discovered, we start to get very, very uncomfortable."

When "we get to 50 unexplained deaths in a release of a product, it's gone. It's gone."

"We shut it down (until can) figure out what went wrong."

During 1976 mass-jabbing for swine flu, the program was halted after 25 reported deaths, along with 550 reports of Guillain-Barre syndrome.

No more followed because concern about safety was too great.

The standard followed then was abandoned for all things flu/covid.

According to officially reported US, UK, and EU public health data, well over 4 million mass-jabbing casualties occurred, including many thousands of deaths.

Yet toxic mass-jabbing continues with nothing on the table to halt what's destroying the health of countless millions of people in the West and elsewhere.

According to McCullough, no DSMB was established to monitor what's going on with authority to halt flu/covid jabbing.

Because of unparalleled harm to millions, mass-jabbing "should be halted immediately," he stressed.

Yet since it began last December, "there's been no external advisory committees, no human ethics committee, no data safety monitoring board," he explained.

The Pharma-controlled FDA and  CDC are sponsoring mass-jabbing.

Foxes are guarding the hen house.

These agencies cannot be trusted to be "adjudicators of death," said McCullough .

"They cannot. That violates every regulatory law that we know."

If a DSMB was monitoring things at the time, the program would have been halted immediately because of the unacceptably high mortality rate.

Yet it continues unobstructed in the US/West.

Nothing stopped it. "No safety review" was ordered.

"This is malfeasance" of the highest order, McCullough stressed.

Along with HHS, the CDC, FDA, and NIH, the White House, Congress and most courts — including the Supremes — are "all implicated…"

"They are all culpable" for the most diabolical plot ever conceived against public health in the US/West and elsewhere.

Their toxins permanently disabled tens of thousands of others in the US alone.

They're causing other potentially deadly diseases including cancer congestive heart failure and diabetes.

McCullough minced no words stressing that what's going is a monstrous "atrocity" throughout the West and elsewhere.

"There's no doubt about it. We are in a free fall of a lawless state."

"No (public health) protections" exist, "no enforcement of pharmaceutical laws," no halting of jabs known to be "not safe for human use."

Yet mass-jabbing for US children  young as age-5 looms, to be followed by OKing them for everyone aged-6 months and older ahead — likely in the new year — except in US states prohibiting them without public consent.

Only known safe and effective non-jabbing protocols can treat and cure the viral illness when drug intervention is needed — notably a hydroxychloroquine (HCQ) cocktail or ivermectin.

Failure to treat US/Western patients with their needs in mind is "malpractice," McCullough stresse.

It's criminal to prescribe what doesn't work and harms health when known safe and effective protocols exist.

McCullough also explained that he contracted flu/covid and fully recovered.

"It's one and done," he said. Antibodies from natural immunity protect him from reinfection.

Planned years in advance, it's all about depopulation on an unparalleled scale and establishment of social control tyranny.

Something very big is going on, McCullough stressed.

It's a diabolical plot against unwanted billions of people.

They're targeted for elimination to make the world safe for special interests at the expense of the general welfare worldwide.