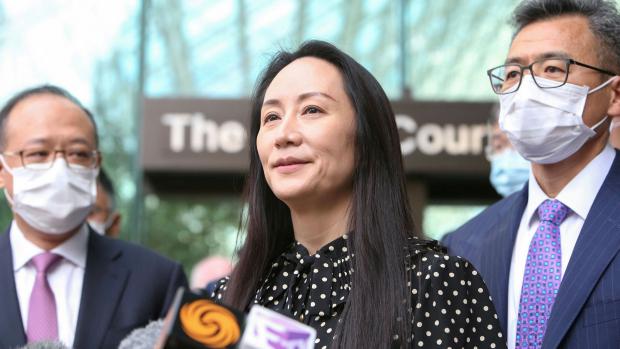 Following US orders, the subservient Trudeau regime illegally held her over 1,000 days for extradition cross-border.

The Trump regime falsely accused her of violating flagrantly illegal US sanctions on Iran.

Meng and her lawyers categorically denied phony accusations against her.

Trudeau's complicity with hegemon USA was politically and economically motivated.

At the time, China's embassy in Ottawa firmly denounced what it called "a gross violation of (Meng's) human rights."

The illegal act greatly damaged China's relations with the US and Canada.

It also showed that Canada is a virtual appendage of US foreign policy, bowing to its hegemon will on demand.

Hauwei is a global telecommunications giant.

The world's 5G technology leader, it's also a leading manufacturer and provider of cellular-tower electronics, smartphones, as well as related hi-tech products and services to customers worldwide.

Action against Meng was and remains all about diabolical US efforts to undermine China's development as an economic, financial, industrial, technological and military powerhouse — a failed policy from inception.

In stark contrast to hegemon USA's aims to dominate other countries — by brute force if other efforts fail — China priorities cooperative relations with world community nations, according to the rule of law.

According to China's official People's Daily:

Last month, "more than 14.5 million netizens from over 100 countries and regions including major allies of the US such as the UK, Australia and Canada, signed a petition launched by the Global Times on August 18 and an open letter sent to Canadian ambassador to China Dominic Barton, demanding Meng's immediate and unconditional release and protesting against the ugly acts of the" Trudeau regime.

"Does Canada still know right from wrong? Where are the human rights it (falsely) claims to defend?"

On Friday,  Meng and her lawyers struck a deal with the Biden regime's justice department for her release and return to China.

The illegally applied GPS tracking ankle bracelet she was forced to wear was removed on the same day.

At the same time, Canadian citizens held in China on charges of espionage — Michael Kovrig and Michael Spavor — were released to return to their home country.

On Friday, Trudeau announced that their aircraft cleared Chinese airspace on route to Canada.

The announcement came after Meng's release.

"She has not pleaded guilty, and we fully expect the (fabricated) indictment will be dismissed with prejudice…Now, she will be free to return home to be with her family."

Separately, a Canadian court signed a discharge order for Meng to be free to return home.

According to Chinese Academy of Social Sciences research fellow Lu Xiang, Meng release was largely because extraditing her to the US would risk possibly wrecking relations with China beyond repair longterm.

As its main political and economic rival on the global stage — at a time of Beijing's increasing global preeminence in contrast to US decline — hegemon USA is highly unlikely to quit trying to turn things around.

What hasn't worked for many years most surely won't ahead.

US efforts to undermine Huawei continue.

Along with other issues, hostile US actions against Huawei and other Chinese enterprises show that near-ruptured bilateral relations remain unchanged.

Before departing Canada to return home, Meng said the following:

"Thank you motherland. Thank you to the people of the motherland. You have been my greatest pillar of support."

"Over the last three years my life has been turned upside down."

"It was a disruptive time for me as a mother, a wife and as a company executive."

"But I believe every cloud has a silver lining. It really was an invaluable experience in my life."

"I will never forget all the good wishes I received."