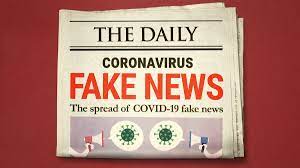 All things flu/covid comprise the most diabolical assault on humanity ever conceived.

Establishment media support for the mother of all scams has been crucial to keep it from imploding — from collapsing under the weight of colossal Big Lies and mass deception.

Infamous for state-approved propaganda on virtually all major domestic and geopolitical issues, MSM exceeded all earlier fake news combined by daily regurgitation of the fabricated official narrative based on state-approved talking points.

In cahoots with privileged interests, they're mortal enemies of governance serving everyone equitably, according to the rule of law

They secretly allied with US/Western dark forces and Pharma to heavily promote what's designed to destroy health and fundamental freedoms on the phony pretext of protecting and serving us — a notion the diabolical cabal rejects.

They support mass-extermination of unwanted hundreds of millions worldwide.

They back implementation and enforcement of social control tyranny by eliminating what remains of fundamental freedoms — in favor of Great Reset draconian harshness replacing them.

Since early last year, they assaulted the public with daily managed news misinformation and disinformation on the most crucial issue of this and all other eras.

All things flu/covid reports are based on state-approved/official narrative rubbish — essential to know truths consistently suppressed.

A conspiracy of privileged interests is waging undeclared war on humanity.

Except for truth-telling alternative media, likeminded medical and scientific community members, as well as others dedicated to exposing and condemning unparalleled planned genocide and social control tyranny — wanting it challenged and halted — we're on our own against the most evil assault on our health, lives and rights ever plotted by the darkest of dark forces anywhere.

Since US/Western dark forces and complicit partners heavily promoted a nonexistent pandemic after renaming seasonal flu covid to facilitate mass deception, MSM on cue have delivered a daily dose of fear-mongering fake news to easily duped millions time and again on this most crucial of vital issues.

Tuesday was no exception.

The NYT and other MSM regurgitated Pfizer's Big Lie claim about its experimental health destroying mRNA jabs being safe for children aged-5-to-11 — suppressing that it's profoundly unsafe for everyone in all age groups.

For Pfizer, the Big Lie is all about boosting its bottom line, the same objective for booster and forever-jabbing of everyone.

For US/Western dark forces, it's full speed ahead for mass-extermination and social control tyranny — aided by Big Lies and mass deception, fooling most people most of the time.

Their only similarity is falsely attributing deaths from unrelated causes in both time frames to flu then/covid now.

According to Dr. Gary Kohls and Kevin Barry:

"The Rockefeller Institute and its experimental bacterial meningococcal vaccine, contrary to the accepted mythology, may have killed 50-100 million people in 1918-1919."

"According to a 2008 National Institute of Health paper, bacterial pneumonia was the killer in a minimum of 92.7% of the 1918-19 pandemic autopsies reviewed."

"Newly analyzed documents reveal that the 'Spanish Flu' may have been a military vaccine experiment gone awry" — unrelated to the viral illness.

Yet NPR falsely claimed that flu/covid "killed about as many Americans as the 1918-19 Spanish flu pandemic did…approximately 675,000" — a bald-faced Big Lie about then and now.

Compounding its fake news, it falsely claimed that a (nonexistent)  "pandemic has the US and other parts of the world firmly in its jaws (sic)."

Ignored by the Times is that the company is one of the Pharma industry's most heavily fined for harm to millions from its toxic drugs.

J&J "caused an opioid crisis that is evidenced by increased rates of addiction, overdose deaths and neonatal abstinence syndrome, in Oklahoma," adding:

"(M)isleading marketing and promotion (of the company's opioids) compromised the health and safety of thousands of Oklahomans."

"We have proven that Johnson & Johnson have built its billion dollar brand out of greed and on the backs of pain and suffering of innocent people" — despite warnings from its scientific advisors.

No one with any sense and sensibility should have anything to do with its hazardous drugs — nor with some of its over-the-counter products known to harm health.

They falsely claim that the vast majority of outbreaks affect the unjabbed when it's largely the other way around.

On Monday, CNN falsely claimed that flu/covid cases "forc(e) hospitals to ration care" — one of its many bald-faced Big Lies, what the most distrusted name in TV propaganda is infamous for.

On Tuesday, the cable channel dubiously reported that 46-year-old unjabbed registered nurse Natalie Rice became seriously ill from flu/covid earlier this summer when most likely what adversely affected her was something else.

In late August, she died. Like hundreds of thousands of others, cause of death was automatically labeled flu/covid to artificially inflate numbers.

Last Sunday, fraudster Fauci falsely claimed that 675,000 Americans died from covid (sic) — a grossly inflated number to fear-monger unjabbed refuseniks to self-inflict harm with what everyone should shun.

Based on science, not politics or MSM rubbish, remaining unjabbed is infinitely safer than the other way around.

Instead of truth and full disclosure, MSM feature fake news, suppressing what's vital for everyone to know — especially on the most crucially important issue of all time.

Finally Steve gets his writings correct!

Author: The Media's Agenda is Not to Mislead People, But to Demoralize Them