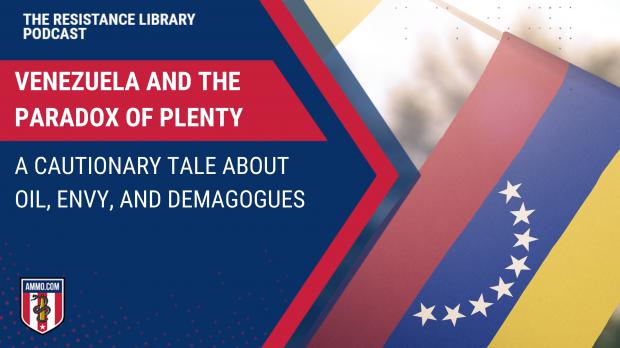 On this episode of the Resistance Library Podcast, Sam and Dave discuss Venezuela and the paradox of plenty – a cautionary tale about oil, envy, and demagogues. As Venezuela falls into the abyss of economic collapse – the economy has halved in five years, a contraction worse than the Great Depression or the Spanish Civil War – a simplistic narrative in the American press has formed, which starts with the Chavez regime seizing control of the country in 1998.

The charismatic populist Hugo Chavez is, after all, the leader most Americans are familiar with when talking about Venezuela, as he made worldwide headlines with his 2006 UN speech where he called U.S. President Bush "a devil" while celebrities like Sean Penn and Michael Moore cheered him on.

In the 1950s, Venezuela enjoyed its place among the top 10 richest countries on a per-capita basis. How has it turned into a country where more than 2.3 million of its 30 million citizens have fled since 2015 due to starvation? A toxic mix of creeping interventionism, institutional decay, private property seizures, irresponsible fiat monetary policy, and wide-ranging corruption are the main culprits. But Chavez wasn't the instigator of this mess; the story goes back much further and should serve as a cautionary tale about one country's faithful adherence to the tenets of socialism to the bitter end.

You can read the full article "Venezuela and the Paradox of Plenty: A Cautionary Tale About Oil, Envy, and Demagogues" at Ammo.com.

And check out our sponsor, Libertas Bella, for all of your favorite Libertarian shirts at LibertasBella.com.