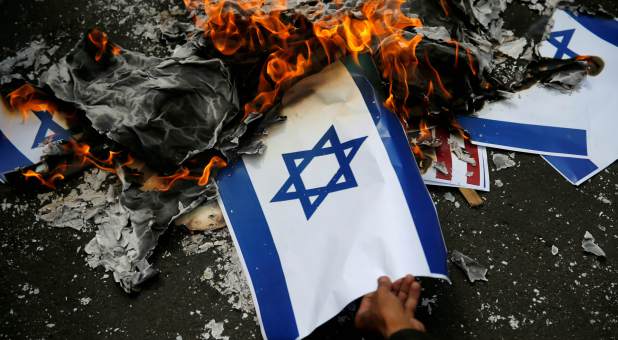 Since none existed throughout the post-WW II period, they were invented — sovereign independent China, Russia and Iran topping the list.

No evidence suggests Iranian responsibility for what happened.

Yet over the weekend, UK Foreign Minister Raab escalated UK war on Iran by other means.

Citing no evidence, he said Iran was "highly likely" behind an attack on an Israel managed tanker in the Arabian Sea off the coast of Oman last week (sic), adding:

"We believe this attack was deliberate, targeted, and a clear violation of international law (sic)."

"Iran must end such attacks, and vessels must be allowed to navigate freely in accordance with international law (sic)."

"The UK is working with our (imperial) partners on a concerted response to this unacceptable attack (sic)."

An unnamed Israeli official falsely accused Iran of "sowing violence and destruction in every corner of the region (sic)" — a US/Western/Israeli specialty, not how the Islamic Republic operates.

"In any case, we know how to send a message to Iran in our own way."

"The illegitimate existence of the Quds occupying regime should desist from raising baseless allegations."

'It is not the first time that the regime raises" them.

They're "childish and within the framework of the rented and famous lobby of the Quds occupying regime."

"The officials of the Zionist regime should know that they cannot cure their pains with such blame games."

"Wherever the Quds occupying regime has set its foot, it has brought insecurity, violence, terror and war, and for this reason, those who paved the ground for the regime's presence in this region should be blamed."

"We must be very cautious not to fall into traps set by the Zionists and the Quds occupying regime in such cases."

"The regime is at the lowest point of legitimacy and is experiencing the most difficult days of its life."

Since Biden replaced Trump by the most brazen election fraud in US history, Israel has gone all-out to push the new regime against rejoining the JCPOA.

Was it Israel's latest dirty trick to try killing the JCPOA — by falsely blaming Iran for what no evidence points to its involvement?

Was what happened a joint US/Israeli false flag to blame Iran like many times before unjustifiably?

Was Britain involved in the incident — in cahoots with the US and Israeli regimes?

Was what happened a coup de grace to kill the JCPOA once and for by driving a stake through its heart?

Was this aim achieved beyond a reasonable doubt?

The JCPOA most likely was DOA before the Biden regime usurped power — going along with its predecessor's anti-Iran policy after taking office.

Vienna talks have likely been theater to conceal what was diabolically planned before they began nearly four months ago.

The US-dominated West and Israel are hostile toward nations free from their control — Iran most of all in the Middle East.

Chances of the US-dominated West  and Israel turning a page for improved relations with Tehran are as unlikely as year-round summer weather in Chicago.