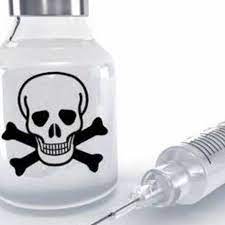 Most flu/covid outbreaks occur in jabbed individuals, according to peer-reviewed science.

Yet what's crucial for everyone to know is suppressed in the West by dark forces and their media press agents.

On July 25, the Vaccine Reaction (VR) reported that flu/covid outbreaks are "spreading among the (jabbed) in highly (jabbed) countries."

According to a press release by the study's authors:

"I'm waiting for my PCR result (sic), but thankfully I have had my jabs (sic) and symptoms are mild."

According to Javid, UK children under age-12 will not be jabbed unless considered extremely vulnerable.

On July 19, the London Guardian reported that "(t)he opinion of the Joint Committee on Vaccination and Immunization (JCVI) expand(ed) eligibility for children, after a previous decision that vulnerable 16-and 17-year-olds could get" jabbed, adding:

"Some ministers signaled that all over-12s could start a program of being (jabbed) from September, contributing to population-wide immunity against" flu/covid (sic).

"At this time, JCVI is of the view that the health benefits of universal (jabbing of) children and young people below the age of 18 years do not outweigh the potential risks."

Saying Britain is one of the world's most highly jabbed countries, VR explained that the nation is experiencing increased outbreaks, the same true elsewhere.

Unrelated to the delta scariant as falsely claimed, it's from jabs that don't protect.

In May, Nobel laureate virologist Luc Montagnier said that in nations with mass-jabbing campaigns, "the curve of (jabs) is followed by the curve of deaths," adding:

Flu/covid jabs create antibodies that force the virus to "find another solution" or "die."

Variants "are a production and result from" jabbing.

Yet Western and other governments falsely claim that the solution to increased outbreaks is more jabbing, including booster jabs for double-jabbed individuals.

"(V)iruses and bacteria are no exception."

"(W)hen you put pressure on a virus or bacteria that's circulating, with the use of a vaccine that contains a lab-altered form of that virus or bacteria, it doesn't seem that it would be illogical to understand that that organism is going to fight to survive."

"It's going to find a way to adapt in order to survive."

The above appears to explain why flu/covid outbreaks mostly occur in people jabbed for protection not gotten.