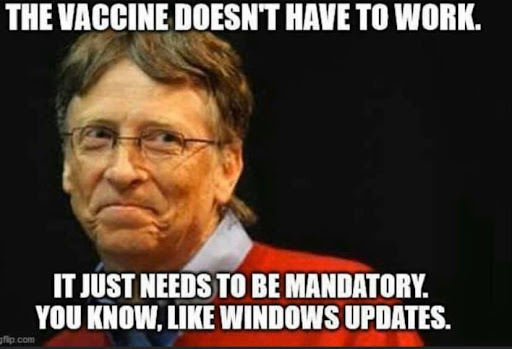 In the US and West, growing tyranny is the law of the land, the rule of law increasingly abolished by dominant dark forces.

Orwell explained that "(m)an is (humanity's) only real enemy."

What he called "a vision of the future" is the present — "a boot stamping on a human face – forever."

A new abnormal replaced the other way around.

Resist or perish are the only options.

"This book explains just how a bunch of crooks are using the fear which has been deliberately created out of a fairly ordinary flu bug to take over the world."

"The usual suspects (include) the Rothschilds, the Rockefellers (and) Bilderbergers" — Western billionaires, including bankers and fraudsters like Bill Gates.

Medical and scientific experts like Coleman, Peter McCullough, America's Frontline Doctors, and countless others like them in the West and elsewhere are demonized (or ignored) for truth-telling on the most cutting-edge issue of our time — at a time of state-sponsored mass deception.

Aided by media press agents like the NYT, BBC, CNN, anti-social media, gatekeeper Google, and likeminded propaganda operations throughout the West, the above is unfolding in real time by enemy of the people ruling authorities with diabolical aims in mind.

Distrust and oppose them.

Make no mistake. Seasonal flu-renamed covid is part of a diabolical  US/Western plot against public health.

It's all about aiming for ruler/serf social control and mass-extermination of unwanted billions of people worldwide.

What's going on and accelerating is the most diabolical/pure evil plot ever conceived against humanity.

If less successful than what's aimed for, things will be more draconian than already ahead.

Around four million federal employees and contractors must be jabbed ahead with flu/covid toxins or submit to weekly or twice-weekly testing, mask-wearing, social distancing, and restrictions for most travel.

He lied saying if unjabbed, "you present a problem to yourself, to your family and those with whom you work (sic)."

He lied claiming that the vast majority of Americans ill from flu/covid are unjabbed.

For increasing numbers in the US and West, it's the other way around.

He lied calling it "an American blessing (to) have (jabs) for each and every American."

He lied saying "(i)t's such a shame to squander that (nonexistent) blessing" that's in fact a state-sponsored curse.

Based on science, the message is clear. Jabs don't protect, just the opposite.

All of the above is intended to destroy US public health, not protect it.

Instead of exposing and denouncing the diabolical mother of all scams, establishment media promote it.

After urging all US military personnel to be voluntarily jabbed in mid-July, Biden regime war secretary Lloyd Austin is expected to mandate it ahead.

On Thursday, the fake Biden ordered the US military to take steps in this direction.

He lied claiming it's all about "protect(ing) them as much as possible (sic)."

On Thursday, he told the war department to add flu/covid jabs to others currently mandated — at a date to be announced ahead.

Separately in defiance of international and federal law, the US (In)justice Department declared that employers may require jabs for workers and other staff — calling what defies the rule of law legal.

In early July, the Biden regime's (In)justice Department falsely claimed that no federal law prohibits "public or private entities from imposing (mass-jabbing) requirements, even when the only (jabs) available are" ones OK'd for Emergency Use Authorization" when no emergency exists, just an invented one to unjustifiably justify what's going on.

Virtually everything endorsed and increasingly mandated in the US/West is intended to harm public health, not protect it as falsely claimed.

US federal Emergency Use Authorization (EUA) law permits unapproved drugs to be used during an "emergency."

"(B)ut (they) must remain optional at the patients' discretion" — according the Nuremberg Code that's binding international law on all governments worldwide.

"The DOJ knows this. They simply don't want to enforce the law."

At the same time, "the DOJ has no say over the numerous state laws that have banned…mandate(d)" flu/covid jabs and passports, adding:

"The DOJ (transformed itself into) a rogue federal agency that selectively enforces laws based on" politics with diabolical aims in mind.

At this time, parents of children under age-12 can opt out of having their kids in this age group jabbed.

Ahead it's virtually certain to be mandated for everyone in the US and West without parental consent.

Safe and effective medical treatments, including drugs, aren't given away free —what's going on with flu/covid jabs.

He called on US school districts to mandate them for students aged-12 and older.

All of the above and more are all about destroying health and mass-extermination, not the other way around.

What Biden's double called an "American tragedy" among the unjabbed is all about wanting maximum numbers in the US to self-inflict harm.

If not in sufficient numbers ahead, what's voluntary will be increasingly mandated or be ostracized from public places.

Corporate America is moving in this direction.

Much more of the same is surely coming ahead without mass resistance against what's all about destroying health, not protecting it.

Over 100 bills were introduced by states to prohibit employers from mandating flu/covid jabs, according to the National Academy for State Health Policy.

The above is encouraging but much more of the same is urgently needed in the US nationwide and throughout the West.