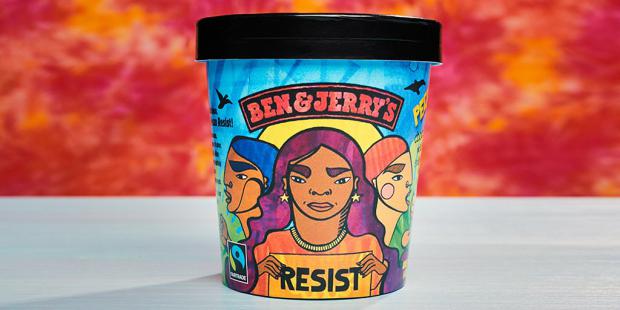 Founded in 1978 by Ben Cohen and Jerry Greenfield, the company was sold to Unilever in 2000.

Last week, it acted belatedly but courageously in announcing that its ice cream will no longer "be sold in the Occupied Palestinian Territory (OPT)" -- where no foreign companies should operate.

A parent company statement said it "recognize(s) the right of the (B & J) brand and its independent board to take decisions about its social mission."

Apartheid Israel and the Biden regime denounced it as expected.

He told investors that B & J made the move on its own in line with its history of social activism.

It's constitutionally supported, he failed to add.

Everyone in the US is constitutionally free to express views on all issues, according to the First Amendment — upheld by landmark Supreme Court rulings.

"(I)f there is a bedrock principle underlying the First Amendment, it is that government may not prohibit the expression of an idea simply because society finds (it) offensive or disagreeable."

"(A)bove all else, the First Amendment means that government has no power to restrict expression because of its message, its ideas, its subject matter, or its content."

"If the First Amendment means anything, it means that a state has no business telling a man, sitting alone in his own house, what books he may read or what films he may watch."

"Our whole constitutional heritage rebels at the thought of giving government the power to control (our) minds."

According to the Constitution's Article III, Section 1, appointed judges have judicial power to overrule acts of Congress and presidential decisions.

The Court is empowered as the final arbiter of what is or is not the law.

Marshall set a precedent by voiding an act of Congress and presidential power.

The ruling stood the test of time to the present day — even though presidents and Congress act ad libitum time and again in defiance of international, constitutional, and US statute laws.

Most often, no judicial action restrains them from acting extrajudicially.

Will B & J's decision to no longer operate in Israel's illegally Occupied Territories become a defining moment against its apartheid system?

According to Arab American Institute president James Zogby, the company made a "courageous (and) risky decision," adding:

"Businesses don't usually do stuff like that. This was a big deal (with potential) significance" against unlawful Israeli occupation.

Israel wants B & J punished. It wants 35 US states with constitutionally illegal anti-BDS laws to invoke them against the company.

"It's disturbing that we have foreign officials trying to enlist US lawmakers in cracking down on one of our country's most time-honored constitutional rights, in order to suppress growing dissent against Israel's violation of Palestinian rights," adding:

"With public scrutiny comes action, and Ben & Jerry's decision shows companies are listening, and when they take a stand, it shakes the Israel lobby" and Jewish state.

"It's no surprise. Ben & Jerry's is under tremendous pressure, and I am sure there are calls to backtrack their support for Palestinian rights."

Palestinian/American lawyer Huwaida Arraf said what's "clear is that Israel is committing the crime of apartheid."

Governments supporting it and businesses operating in the Territories are in breach of the Rome Statute of the International Criminal Court.

They also flagrantly breach International Convention on the Suppression and Punishment of the Crime of Apartheid.

It calls apartheid "a crime against humanity" by denying members of a group "the right to life and liberty of person."

Companies operating in the Territories aid and abet Israeli apartheid.

The US Campaign for Palestinian Rights director Ahmad Abuznaid believes anti-BDS actions in response to B & J's move will likely "backfire," saying:

US activists "are working on campaigns across the country, targeting different corporations and they are taking notice."

Despite courts in Texas, Maryland, Arkansas and Georgia that overturned anti-BDS state laws on constitutional grounds, their legislation illegally calls for state and local governments to divest from, or prohibit contracting with, entities engaged in BDS actions against Israel.

Similar legislation failed to get majority Senate support in 2016 and 2017.

In 2019, US/Israeli security related legislation was passed overwhelmingly in the Senate — despite denunciation by the ACLU, calling the measure an unconstitutional infringement of free expression.

Support for BDS activism is the most effective way to combat the scourge of Zionist tyranny and Israeli apartheid.

Perhaps waging war on ice cream by Israel and US hardliners will prove a defining moment for long denied Palestinian justice.

In defiance of the constitutional right of free expression, Florida Governor Ron DeSantis told the state's administrative board to stop buying Unilever assets if B & J pulls out of the Occupied Territories — citing the state's unconstitutional anti-BDS law.

"Texans have much better options for a sweet treat this summer (than) stuff made by a foreign-owned company started in Vermont."

In stark contrast to the above, Vermonters for Justice in Palestine urged B & J to call on other firms to pull out of the Territories and Jewish state altogether, adding:

"(B)y maintaining a presence in Israel, Ben & Jerry's continues to be complicit in the killing, imprisonment and dispossession of Palestinian people and the flaunting of international law."

B & J's action was a step in the right direction.

If other significant firms act in similar fashion, Israel will be hurt economically, perhaps the best way to get its attention.