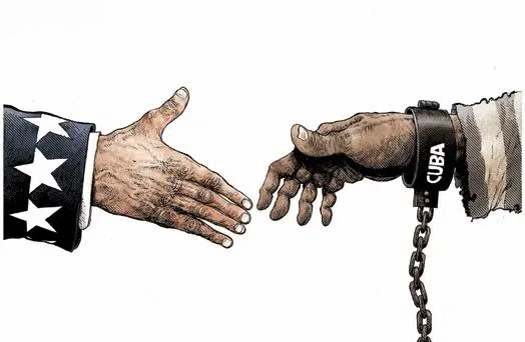 No nation in world history inflicted more harm on more people over a longer duration than hegemon USA.

No nation is more responsible for mass slaughter and destruction on an unparalleled scale, none more contemptuous of the rule of law it consistently breaches in pursuing dominance over other nations by whatever it takes to achieve its diabolical aims.

None more greatly reviles governance of, by and for everyone equitably.

What democracy is supposed to be is tolerated nowhere by its ruling class, especially not domestically where the real thing is banned — a fantasy version in place pretending otherwise.

Cuba has been free from US tyrannical control since its 1959 liberating revolution, what the vast majority of its people support, wanting no part of Fidel once called the "filthy" US system.

The Biden regime is vying to exceed the worst of its lawless predecessors.

Along with driving US relations with China and Russia to their lowest levels in modern memory — risking unthinkable war — its dominant hardliners are plotting regime change against nations free from their control, including Nicaragua and Cuba in the Americas.

"Today (the US) is imposing new (illegal) sanctions" on Cuban officials for countering Biden regime destabilization plans that are all about wanting the country transformed into a vassal state under pro-Western puppet rule.

"This is just the beginning" of the Biden regime's diabolical plan, his impersonator announced.

On Wednesday, the US Treasury's Office of Foreign Assets Control (OFAC) (illegally) sanctioned Cuban Defense Minister Alvaro Lopez Miera and the Interior Ministry's National Special Brigade (SNB) — in charge of protecting Cuban safety and security, including from hostile actions by foreign regimes like the US.

"Treasury will continue to enforce its (illegal) Cuba-related sanctions, including those imposed today, to support the people of Cuba in their quest for democracy (sic)" the US tolerates nowhere.

He condemned the State Department for "exercising offensive and humiliating pressures on European countries, particularly 6 from Eastern Europe, and 8 from Latin America; to force them to support a declaration condemning Cuba."

International Human Rights Commission chairman Muhammad Shahid Amin Khan denounced "(u)nacceptable behavior by the US and EU (for) violating the respect of human rights and international laws which protect the sovereignty of all (UN) members States."

"It is cruel to obstruct humanitarian aid intended to save lives in Cuba or in any other country."

"The (illegal) US blockade against Cuba, in force for over 60 years, has not allowed Cuban authorities to develop the country's economy," adding:

"We condemn and call for an end to the campaign of disinformation and incitement to externally inspire acts of vandalism."

Operating throughout Cuba, RCFS vowed to continue supporting its people in defending their sovereign rights — against hegemon USA's aim to eliminate them.

US blockade and sanctions war on Cuba and its people since 1962 are all about trying to suffocate them into submission to Washington's hegemonic aims.

What hasn't worked for over six decades is highly unlikely to succeed ahead.

He lied accusing its government of "human rights abuses" — a longstanding US/Western specialty against ordinary people at home and abroad.

He vowed that more illegal Biden regime sanctions will follow to squeeze Cuba's economy and harm its people more than already.

Both right wings of the US war party tolerate no nations free from their control.

US war on humanity is all about wanting their sovereign independence eliminated, along with hardening and enforcing tyrannical homeland rule.