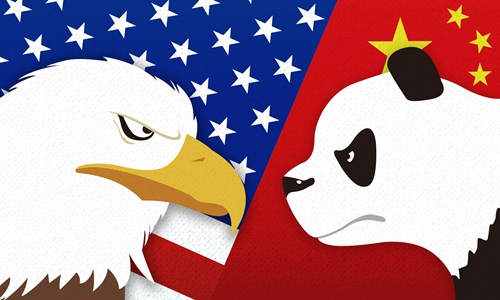 Along with banning imports from China's Jinjiang region, it calls for boycotting the Beijing 2022 Olympics, prohibiting US researchers from dealing with China's' military, and strengthening US ties with Taiwan.

A separate US Uyghur Human Rights Policy Act of 2020 calls for government agencies to report on alleged human rights abuses by Beijing against Jinjiang Muslims — likely even if unable to find any, invent some.

The Eagle Act is one of the latest US anti-China shoes to drop.

Virtually certain to be adopted by Congress and signed into law by Biden's double, it's part of hardening US war on China by other means that risks rupturing relations altogether or worse.

The Eagle Act and other US Uyghur legislation has nothing to do with protecting their rights dominant US hardliners don't give a hoot about.

These and numerous other unacceptable US measures are all about China bashing, alleging a threat from Beijing that doesn't exist.

In response to a US C-146A cargo aircraft landing at Taipei's Songshan Airport on Thursday, China's Defense Ministry accused the Biden regime of playing with fire instead of respecting and observing the Sino/US agreed on one China policy Beijing calls nonnegotiable.

In response to the Trump regime's breach of what China considers inviolable, its Foreign Ministry said the following:

"The actions of the US side seriously violate the one-China principle and the three China-US joint communiques. China firmly opposes it."

"Taiwan is an inalienable part of Chinese territory, and the government of the People's Republic of China is the sole legal government representing China."

"This is a fact recognized by the international community."

"China firmly opposes any form of official ties between the United States and the Taiwan region."

"This position is consistent and clear."

Yet Biden regime hardliners continue anti-China policies of its predecessor and is hardening them — upping the stakes for possible direct confrontation.

If needed, China will use force to defend its territory.

That's where things may be heading if hostile US actions demand a defensive response.

On Friday, China's Foreign Ministry said Beijing will take whatever actions are necessary to defend the nation's sovereignty, security and development interests — including what relates to Taiwan.

The ministry compared hostile US actions to "tiny ants that try to shake (a) mighty tree."

Fact: The center aims to eliminate foreign-sponsored terrorism and extremism that's all about trying to undermine China.

Fact: Parents and their children decide on their own about attending boarding schools, no government mandates imposed.

Fact: Chinese citizens throughout the country are free to choose their work in an environment where their rights are protected.

Fiction: Hundreds of people were detained in a vocational education training center (sic).

Fact: Criminals and others harming others alone were detained.

Fact: What the US falsely calls "concentration camps" are "civil institutions" to benefit Jinjiang residents.

Fact: Jinjiang authorities provide jobs for residents where they live to lift them from poverty.

US disseminators of fake news about Jinjiang include State Department officials, the CIA, National Endowment for Democracy to eliminate it wherever it exists, exploitive USAID headed by war goddess Samantha Power, and other US dark forces.

US wars by hot and/or other means targets over 30 countries — for not bending to Washington's will.

China and Russia on the US target list are fully able to defend themselves against whatever hardliners in Washington throw at them — and respond with toughness as needed.