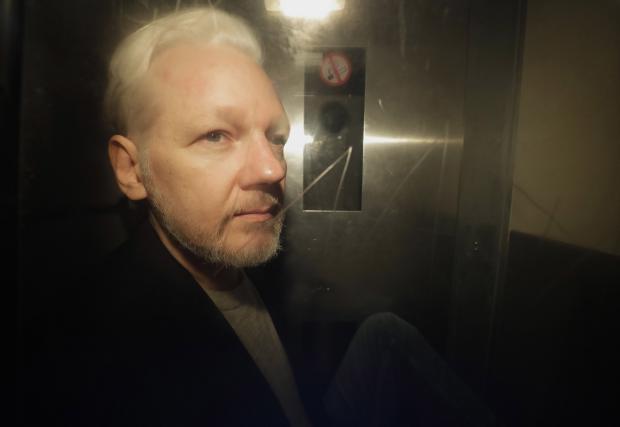 The same goes for other truth-tellers that expose US/Western high crimes too egregious to ignore.

The US and UK are killing Assange by medical neglect and slow torture to warn other truth-telling journalists and activists that they'll face a similar fate if challenge imperial lawlessness effectively.

It made no difference that a so-called Assange friend, a key witness against him-turned FBI informant, recanted his accusations, exposing them as Big Lies.

Trump regime charges against him were fabricated.

An investigative journalist, he earlier said WikiLeaks has the right "to publish newsworthy content," adding:

"Consistent with the US Constitution, we publish material that we can confirm to be true."

Truth-telling on all issues, key ones most of all, is the highest standard of what journalism is supposed to be all about.

Assange passed the test multiple times over, why he was maliciously targeted, dragged from Ecuador's London embassy, and confined in Britain's maximum-security Belmarsh prison — with intent for him never to be free again.

Numerous testimonies of support and letters calling for his release were ignored by his captors — the US and UK enforcing police state injustice.

On July 7, Doctors for Assange called on Biden regime hardliners to release him to no avail, saying the following:

Along with "politicians, human rights, press freedom, and rule of law advocates across the globe," they called for an end to "unwarranted (US/UK) persecution and torture of Julian Assange, by dropping all charges against him now," adding:

Along with medical neglect, he "suffer(s) (from) severe psychological abuse."

Winning his case against unlawful extradition to the US based on "trumped" up charges, he remains indefinitely detained, pending resolution of a US appeal to reverse the ruling.

According to Assange's partner Stella Moris last month, UK MPs from "all major parties wrote to (the Biden regime) that the UK is 'increasingly confronted with the contradiction of advocating for press freedom abroad while holding Mr. Assange for years in the UK's most notorious prison at the request of the' " Trump and Biden regimes.

Nothing remotely justifies Assange's incarceration and slow torture with intent to kill him.

"A statue of Julian, Edward Snowden and Chelsea Manning by Italian sculptor Davide Dormino sits on the Bains de Paquis pier in the heart of Geneva," Moris explained.

The Biden regime continues the worst of its predecessors' wars on humanity, the worst of their human rights abuses.

"Julian has now been in continuous incarceration for over a decade" — suffering from brutal mistreatment. Moris explained.

The Biden regime's appeal to keep him imprisoned prevents his release.

He's "a high risk of suicide" because of brutal mistreatment under conditions, "amounting to cruel, inhuman and degrading treatment in (Britain's) most punitive and repressive prison," Doctors for Assange stressed — guilty only of journalism as it should be.

Like its predecessor, the Biden regime wants his press freedom, civil liberties and human rights denied.

Numerous calls to release him by legal experts, physicians, human rights activists, and others continue to fall on deaf ears in Washington and London.

Charges never should have been brought against him over two years ago.

The Biden regime should have been rescinded them straightaway after replacing Trump.

Maintaining them is one of many examples of fantasy democracy in the US and UK.

Their ruling regimes are guilty of the highest of high crimes multiple times over.

"(T)he longer this goes on, the more likely it is" that Assange may commit suicide to end the brutal ordeal he's experiencing.

"The US is committed to setting an example for all future whistleblowers."

"The case against Assange was never a legal case, but a political one."

"(P)olitics have precedence over the law."

"The US Department of 'Justice' will double-down on other aspects of the trumped-up case against Assange" to assure he's never free again.

After spending a few hours with him, he believes he's not suicidal.

If he dies mysteriously like Jeffrey Epstein's alleged suicide in August 2019 — to silence him — Zayas believes Assange's death would be "an extrajudicial execution for which" US and UK dark forces are infamous for.

He's threatened by death this way or from protracted medical neglect and slow torture.

The US and UK are complicit in wanting him eliminated.

Last Friday was his 50th birthday.

A day of mourning, not celebration, perhaps US/UK dark forces will assure that he won't be around for his 51st.