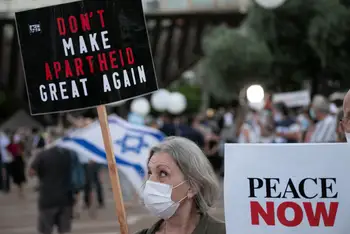 Far and away, hegemon USA caused more harm to more people over a longer duration than any other nation in world history.

Pound for pound, as the saying goes, Israeli apartheid oppression tops the list of gangster state ruthlessness during its existence compared to other small world community rogue states.

New Israeli management continues its predecessors' crimes of war, against humanity and other atrocities against long-suffering Palestinians — with no change of longstanding Jewish state wicked ways in prospect.

On Wednesday, B'Tselem reported the following:

On May 25, Occupied West Bank Israeli police blocked Ahmad 'Abdu's car with him in it.

"The apparently injured 'Abdu open(ed) the right door, at which point the officers surround(ed) the car, open(ed) several of its doors, apparently dragg(ed) (him) out, and then le(ft) without extending him first aid," B'Tselem explained.

A fake news statement, fooling no one, falsely claimed that Abdu (was) killed as part of an "arrest operation (sic)."

B'Tselem minced no words saying "(o)pening live fire at a person sitting in his car, without even trying to arrest him, is not an 'attempted arrest."

"It is a targeted killing" — amounting to likely premeditated cold-blooded murder, a longstanding Israeli specialty.

Eyewitnesses said Adbu was alive when Israeli killer cops left him unaided to bleed to death.

Abrasions on his body showed he dragged several meters from his car.

After police left, witnesses called an ambulance for help.

Taken to a hospital, 'Abdu was pronounced dead on arrival, one of thousands of Palestinians eliminated by Israeli apartheid viciousness.

Most always in response to its crimes of war, against humanity and other rule of law breaches, the world community yawns and does nothing.

According to B'Tselem, Israeli border police falsely accused 'Abdu of being a "terror accomplice (sic)."

No arrest attempt was made for what clearly was premeditated murder.

B'Tselem stressed that "documented" evidence showed that Israeli police…shot and killed him the moment they stepped out of their vehicle."

"In its statement, Border Police did not even argue that 'Abdu posed any kind of danger to the force, and provided no explanation whatsoever for the lethal shooting."

"Opening live fire at a person sitting in his car (threatening no one), without even trying to arrest him, is" premeditated murder.

Aged-17, he was abducted and imprisoned uncharged — even though afflicted by myasthenia gravis.

According to myasthenia.org, it's "a chronic autoimmune neuromuscular disorder that is characterized by fluctuating weakness of the voluntary muscle groups."

"There is no known cure for MG, but there are many effective treatments that can make managing life with MG easier."

Along with MG, Amal's recent cancer surgery left him with "severe headaches and shortness of breath," Addameer explained.

Because of his major health issues that require close monitoring and treatment, UN human rights officials called for "all necessary interim measures to halt alleged violations…prevent their re-occurrence…(and) ensure the accountability of any person responsible."

Amal was politically imprisoned for six months, subject to holding him indefinitely as Israel's discretion — based on what Addameer called "secret material" unavailable to him or his attorney, adding:

His case "highlights the Israeli apartheid regime's systematic targeting of Palestinian children, demonstrating that no one is exempt from Israel's arbitrary policy of administrative detention and deliberate medical neglect, not even vulnerable Palestinian children or when grave health conditions emerge."

Israeli regimes deny Palestinian children rights afforded them by international law — including the Convention on the Rights of the Child, ratified by Israel in October 1991.

Addameer called on activists and groups for justice to join its "call to #FreeAmalNakhleh by sending a letter via email or fax to the Israeli Central Command Israeli Intelligence Officer Naama Rosen Greenberg to call for the immediate release of child detainee Amal Nakhleh, an end to the arbitrary detention of Palestinian children, and an end to the systematic practice of administrative detention more broadly."

On Wednesday, the Gaza-based Palestinian Center for Human Rights (PCHR) said the aftermath of Israeli aggression on the Strip last month left Gazans endangered by "unexploded missiles and ordnance whose effects threaten their lives at any given moment," adding:

"Due to lack of equipment and capabilities resulting from the tightened and arbitrary Israeli-imposed closure on the…Strip, the technical crews at (its) Ministry of Interior…could not destroy or deal with the remnants of the Israeli weapons and munitions launched during the latest Israeli" aggression.

"This (heightened) a humanitarian catastrophe that threatens civilians' lives in" Gaza.

"Israeli warplanes destroyed the Explosives Engineering Department and its equipment in Gaza City last month…deepening the crisis (by) crippl(ing) the efficiency work of the department that has become incapable of dealing with the suspicious and explosive objects."

The Netanyahu and Bennett regimes bear full responsibility for what now threatens Gazan lives and well-being in the aftermath of IDF aggression.

'Blood for Blood': On Jenin and Israel's Fear of an Armed Palestinian Rebellion