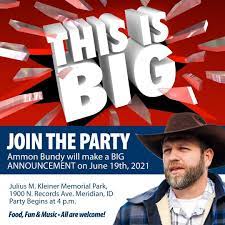 EDITOR'S NOTE - THIS WAS SENT TO BE IN AN EMAIL FROM A FRIEND OF AMMON'S:

My family and I are good friends with Ammon Bundy and his family.  And so we have been looking forward to his "Big Announcement" on June 19th at Kleiner Park, that he has been talking about for the last few months.

However, Ammon has actually let me in on the big secret, and I actually know what the "Big Announcement" is!  And it is seriously mind-boggling.  I know, I know, this feels like a childhood, "I know something you don't know" tease, but it's legit.

Personally, I would love to support Ammon Bundy for Governor, and I would furthermore love to support an entire slate of conservative candidates across the board. I'm all in for that!  But, like I said, that is not what the "Big Announcement" is.

Since I have been privileged to be made privy to what the "Big Announcement" is, all I can tell you is that it is a thousand times more exciting than anyone announcing they are running for office, or anyone announcing opposition to anybody or anything.  What Ammon is going to ANNOUNCE on June 19th is truly revolutionary.  I've never heard anyone in my life say what he's going to announce.  Not even close.  And I don't use that word "revolutionary" lightly.  Ammon's "Big Announcement" has the power to change our country for freedom, liberty, and prosperity in ways I never imagined seeing or hearing in my lifetime (and I'm still a young man—like the classic song says).

Let me just be very plain with you—I'm a very optimistic and positive person, if you know me, you know that to be true.  But I have felt very hopeless concerning the state of America and our country's future.  I don't have to repeat to you the reasons why—because you already know.  But as helpless and hopeless as I've felt recently, I can tell you that after hearing and learning the details of Ammon's "Big Announcement," I have never felt more optimistic, more full of hope, and more invigorated about our country's future and the potential we have in this great nation.

I guess I said all that just to say this—YOU DON'T WANT TO MISS AMMON'S BIG ANNOUNCEMENT! Fortunately, even though you live out of state, Ammon has arranged to have the entire event professionally livestreamed so you don't have to miss it!  To join the livestream, just click on the link below:

P.S.  I don't know if you heard, but Ammon's Dad, Cliven Bundy, is coming up from Nevada and he's going to speak along with Ammon's mother Carol.