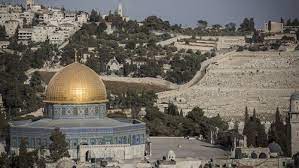 State-Terror on the Mount

What Jews call the Temple Mount in Jerusalem is al-Haram al-Sarif/the Noble Sanctuary for Palestinians and other Muslims.

It's home to the Al-Aqsa Mosque, Islam's third holiest site — after Mecca's Sacred Mosque and the Mosque of the Prophet in Madina.

Epicenter of longterm struggle, Jerusalem for Christians is where Jesus lived and died.

In November 1947, UN General Assembly Res. 181 —  the Palestine Partition Plan — granted 56% of historic Palestine to Jews (with one-third of the population) and 42% to Palestinians.

Jerusalem was designated an international city.

"(A)ll measures taken by Israel to change the physical character, demographic composition, institutional structure or status of the Palestinian and other Arab territories occupied since 1967, including Jerusalem, or any part thereof, have no legal validity," adding:

"Israel's policy and practices of settling parts of its population and new immigrants in those territories constitute a flagrant (Fourth Geneva) violation...and also constitute a serious obstruction to achieving a comprehensive, just and lasting peace in the Middle East."

In July 1980 — in flagrant violation of international law — Israel illegally annexed Jerusalem as its exclusive capital.

Longterm Israeli plans calls for Judaizing the city by ethnically cleansing Arabs to make way for exclusive Jewish development and use.

Throughout Israeli history from inception, the world community did nothing to hold its ruling regimes accountable for high crimes too egregious to ignore.

At the same time, virtually nothing has been done with teeth to uphold Palestinian rights they're denied under suffocating occupation.

They stormed the Al-Aqsa Mosque compound brutally and illegally in response to a peaceful rally by Palestinians.

Showing support for the Prophet Mohammad, they rallied in response to insults by extremist Israeli Flag Day marchers on Tuesday.

According to the Palestinian Red Crescent, at least nine people were injured, three requiring hospitalization.

Wounds were from Israeli rubber-coated steel bullets — able to seriously injure or kill — as well as from tear gas inhalation and stun grenades.

At least 10 nonviolent Palestinians were arrested.

The Middle East Eye (MEE) said two of its journalists were wounded by Israeli forces.

Villagers demonstrated against an illegal settler outpost in Jabal Sabih, "as well as construction of settler expansion projects in the outskirts of the town," MEE explained, adding:

"Further confrontations also broke out at the main entrance of Beita, where locals protested against the Israeli army's closure of the entrance using large cement blocks to (repressively) restrict the movement of people."

Journalists on the scene were also attacked and injured, including MEE photojournalist Nassr Al-Shtayyeh and cameraman Rabie al-Munir.

The "decision to close the entrance to the town (and four other entrances leading to it) for around a week is collective punishment on all the residents who refuse for settlers to take over the land."

On Friday, Beita worshipers were attacked by Israeli forces. They set a village vegetable warehouse ablaze.

MEE explained that the area is "a focal point of tensions as Palestinians resist (its) growing number of settlement projects."

The Bennett regime is like its predecessors — its high crimes fully supported by the US and West.

The Biden regime intends "do(ing) everything we can to significantly improve the quality of life for the Palestinian people (sic) and to improve Israeli-Palestinian relations (sic)."

Over the last half century, the US vetoed over 50 Security Council resolutions critical of Israeli lawlessness.

Instead of condemning Israeli violence against Palestinian civilians and illegal settlements, Washington supports them.

Like many times before, a White House statement dubiously said "Israel has a right to defend itself" — against invented enemies because no real ones exist, the statement failed to explain.

It also ignored Israeli aggression against besieged Gazans for the fourth time since December 2008.