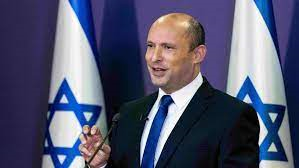 Continued Israeli aggression suggests more of the same ahead.

Israeli regimes can never be trusted — saying one thing, then going another way.

A permanent state of war has existed since Israel was founded on stolen Palestinian land — millions of its people victimized by Jewish state ruthlessness.

For the past 73 years, the world community did nothing to enforce the rule of law, nothing to help long-suffering Palestinians gain freedom from suffocating occupation.

Straightaway in office, the new Israeli regime proved it's like its hardline predecessors — especially on all things related to illegally Occupied Palestinians.

"The occupation's bombing of the resistance sites is a demonstrative show by the new Israeli" regime, adding:

It's "an attempt by the new (regime) to raise the morale of its soldiers and commanders after it collapsed" in the last round of fighting.

"The resistance will be on the lookout in defense of our people and our holy sites (to respond if Israel) continues to commit idiocies and target our people."

The Bennett regime claimed it responded to incendiary balloons from Gaza.

Landing in southern Israel, they caused a number of easily extinguished fires — clearly no reason to terror-bomb besieged Gaza.

According to Israeli media, the Bennett regime signaled that it's prepared to resume full-scale aggression on the Strip and its people.

"The attack was carried out in response to the launching of incendiary balloons into Israeli territory."

"The IDF is prepared for every scenario, including the resumption of hostilities, in the face of continued terrorist operations from the Gaza Strip (sic)."

"Earlier this evening, the chief of staff held a situational assessment in which he ordered a higher level of preparedness and for the IDF to make preparations for a variety of scenarios including a resumption of fighting in response to continued terrorist activities (sic) from the Gaza Strip."

According to apartheid Israel and its US-led Western backers, Hamas and other Palestinian freedom fighters are "terrorists."

In defiance of the UN Charter, Nuremberg Principles, Fourth Geneva, and other international law, Israeli regimes self-assert the right to commit crimes of war, against humanity, and other atrocities against millions of Occupied Palestinians at their discetion.

According to State Department spokesman Price:

Blinken and Lapid "underscored the strong partnership between the United States and Israel, and America's unwavering support for Israel's security (sic)."

Left unexplained is that the only enemies of both nations are invented. No real ones exist.

According to Israel's Channel 13, a Bennett regime delegation is in Cairo for talks on ceasefire in name only.

Israel's Channel 12 reported that escalated Israeli strikes on the Strip will come if Hamas responds to IDF aggression by rocket fire.

The Times of Israel reported that both the Netanyahu and Bennett regimes blocked millions of dollars of pledged Qatari aid from entering Gaza — to prevent it from reaching its ruling authority Hamas.

Since 11 days in May Israeli aggression ended a month ago, almost nothing has begun to rebuild because the Strip remains blockaded.