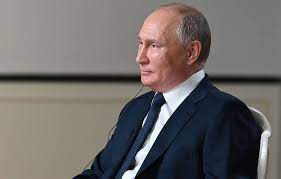 At all times, Putin's remarks feature straight talk responses to questions — in stark contrast to doubletalk by US/Western officials.

He said envoys of both nations will return to their posts abroad — "when exactly…a purely technical issue," adding:

Foreign Ministries of both countries will "begin consultations on the entire range of cooperation on the diplomatic track."

"There are things to discuss, and an enormous backlog" of unresolved issues to deal with.

In stark contrast to Russian diplomatic efforts for conflict resolution between Obama/Biden regime installed fascist rule in Kiev and democratic Donbass, the US side supports forever war without resolution.

Putin said "this issue was touched upon…(but not) in great detail."

So was "Ukraine's potential accession to NATO" — what Russia strongly opposes and won't tolerate as it would risk deployment of Pentagon forces and heavy weapons along its border.

Separately on Ukraine, Putin explained that Kiev refuses to comply with Minsk I and II conflict resolution principles.

On the issue of strategic stability, he said the US and Russia "bear special responsibility for achieving it globally.

It's "because we are the two biggest nuclear powers – in terms of the amount of ammunition and warheads, the number of delivery vehicles, the level of sophistication and quality of nuclear arms," he explained.

While the Biden regime extended New START for five years, what's next is uncertain.

Putin explained that he and Biden's double "showed a willingness to understand each other and look for ways of bringing our positions closer together."

Agreement was reached to engage in dialogue on issues of mutual concern.

On cyber security, Putin stressed that "most cyberattacks in the world come from US cyberspace."

"Canada is second. It is followed by two Latin American countries and then the United Kingdom" — not from Russia.

In response to numerous "inquiries from the United States about cyberattacks on US facilities," Russia provided "exhaustive responses to all of them, both in 2020 and this year."

"In turn, Russia sent 45 inquiries to the relevant US agency last year and 35 inquiries in the first half of this year."

"We have not yet received a single response. This shows that we have a lot to work on."

Russia had nothing to do with cyberattacks on the US, Putin stressed.

No credible evidence exists to refute him — despite phony US claims otherwise.

When Russia is cyberattacked, "we see where the attacks are coming from, and we see that these activities are coordinated from US cyberspace," Putin explained.

He called for "discard(ing) conspiracy theories," engaging bilaterally "at the expert level" in the interests of both countries.

What he and Biden's double agreed on in principle bears no relation to what's likely ahead by the US side against Russia.

On the issue of military exercises by both countries, Putin explained that Russia conducts them exclusively on its own territory, threatening no other nations.

"(T)his is what (the US is) doing now," Putin explained, what's unacceptable.

In 2017, the US "Congress…declared (nonbelligerent) Russia an enemy and an adversary."

"US legislation was amended to include provisions that the United States must maintain democratic governance rules and order in our country and support political organizations."

"(L)et's ask ourselves a question."

"If Russia is an enemy, what kind of organizations will the United States support in Russia?"

"I think not the ones that make the Russian Federation stronger, but the ones that hold it back, since this is the goal of the United States, something that has been announced publicly."

"So, these are the organizations and the people who are instrumental in the implementation of the United States' policy on Russia."

"How should we feel about this? We must be wary. But we will act exclusively within the framework of Russian (and international) law."

On human rights, Putin stressed that "Guantanamo is still open."

"This is contrary to all imaginable rules, to international law or American laws, but it is still functioning."

"CIA prisons that were opened in many countries, including in Europe, where they subjected people to torture, – what is this? Is this respect for human rights? I don't think so."

"Hardly anyone in this room will agree that this is how human rights must be protected. But this is the existing political practice" by the US.

On the Arctic, "US concerns regarding militarization are absolutely groundless," said Putin, adding:

"We are not doing anything new there compared to the Soviet era."

"We are restoring the local infrastructure that was lost and demolished completely some time ago."

"We are creating a relevant base for the Emergencies Ministry, which will give us the opportunity to conduct high-seas rescue missions in case of emergency and to protect the environment."

Russia fully complies with their provisions."

"We have never violated anything," Putin stressed.

Nor is Russia "cracking down" on political opposition, as falsely claimed by the US and West.

Kremlin spokesman Dmitry Peskov said talks were "positive" — despite no ambiguity about longstanding US hostility toward Russia.

Time and again, rhetorical agreements with the US don't bear fruit in reality.

According to Peskov, Geneva talks were on conceptual matters to be followed by work at the expert level, adding:

It'll "be difficult and detailed, and it will certainly take months, especially because we are talking about the launch of such mechanisms as strategic stability talks and so on."

"We will need time for that. There are no deadlines here and there cannot be any."

US policies are hostile toward Russia and other nations free from its control.

They don't exist between the US and nations it wants transformed into vassal states.

The risk of direct US confrontation with both nations is ominously real.

Geneva talks did nothing to lessen the possibility.

Did Japan Just Warn the US of an Impending Joint Attack From China and Russia?