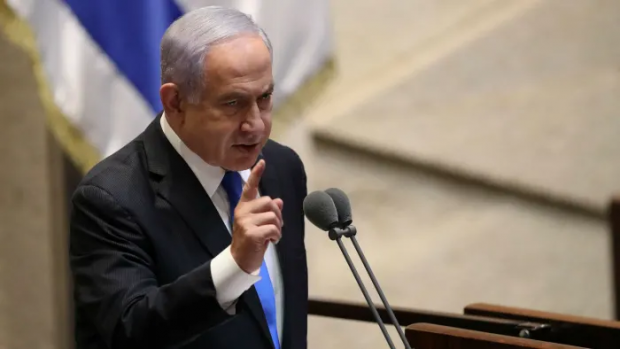 Forgoing his own address to the legislative body, newly empowered coalition partner Yair Lapid — who'll succeed Bennett as prime minister in 2023 per their rotational agreement — slammed insults by Netanyahu supporters while his successor spoke.

Following his swearing in, Blinken said the Biden regime "warmly welcomes the announcement of a new government (in) Israel," adding:

The US "will continue to work with Israel to advance the cause of peace (sic)" — abhorred and not tolerated by both countries, Blinken adding:

"(W)e remain unwavering in our commitment to Israel's security" — at a time when its only enemies are invented, not real.

A White House statement said the US "looks forward to working with Prime Minister Bennett to strengthen all aspects of the close and enduring relationship between our two nations."

Lapid was sworn in as alternate prime minister.

It's all over but the postmortems and plot by Netanyahu and diehard supporters to topple the new government.

In his bowing out June 13 Knesset address as prime minister, he ignored enormous harm to ordinary Jews, Palestinians, Israeli Arab citizens, and region during his 15-year reign of terror — from 1996 - 99 and 2009 - 2021.

Instead, he called his diabolical agenda a "great mission (to) guarantee the existence…security and…prosperity of the" Jewish state (sic)."

What he called "operating night and day…for" the country was entirely self-serving.

He bragged about pressuring, cajoling, and demanding that Israelis unwittingly self-inflict harm by submitting to toxic covid jabs.

He falsely claimed to have achieved "peace for peace, real peace, economic peace…without uprooting a single Jew from his home" — ignoring countless thousands of illegally displaced and dispossessed Palestinians to make way for Jews-only development and use.

Saying "we have brought American recognition of Jerusalem as Israel's capitol, the relocation of the American embassy, the recognition of Israel's sovereignty in the Golan Heights and a change in the policy about the legality of the settlements in Judea and Samaria (sic)" ignored how the rule of law was breached with regard to the above and much more.

Fact: The Palestine Partition Plan granted 56% of historic Palestine to Jews (with one-third of the population), 42% to Palestinians.

Fact: Jerusalem was designated an international city under a UN Trusteeship Council.

Fact: It called for "all governments and peoples to refrain from taking any action which might hamper or delay the carrying out of these recommendations."

Fact: The Security Council was empowered with "necessary measures as provided for in the plan for its implementation."

Fact: Security Council (SC) Resolution 242 (1967) called for an end of conflict and withdrawal of Israeli armed forces from the Occupied Territories.

Fact: The UN Charter, Fourth Geneva, and other international laws protect the rights of everyone everywhere, including Palestinians and other oppressed people.

Fact: Like the US and West, Israel operates exclusively by its own rules — consistently and repeatedly breaching its international law obligations.

Fact: A permanent state of war by hot and other means has existed by Israel against Palestinians since before creation of the Jewish state.

"Individual or mass forcible transfers, as well as deportations of protected persons from occupied territory to the territory of the Occupying Power or to that of any other country, occupied or not, are prohibited, regardless of their motive."

"The Occupying Power shall not deport or transfer parts of its own civilian population into the territory it occupies."

Settlements have "no legal validity and constitute a flagrant violation under international law."

It recognizes no territorial changes "to the 4 June 1967 lines, including with regard to Jerusalem, other than those agreed by the parties through negotiations."

It "(c)alls upon all States, to distinguish, in their relevant dealings, between the territory of the State of Israel and the territories occupied since 1967."

It "(c)alls for immediate steps to prevent all acts of violence against civilians, including acts of terror, as well as all acts of provocation and destruction, calls for accountability in this regard…"

Netanyahu bragged about years of undeclared war on Syria during his tenure, a nation posing no threat to Israel or other countries.

Time and again, he invented an Iranian "threat" that doesn't exist.

Defying reality, he falsely claimed to "have invested in Arab society in Israel in infrastructure, in education" — ignoring a perpetual state of war by hot or other means against Arabs in Israel and the Occupied Territories, wanting them removed from land for exclusive Jewish use.

Calling Israel's new government "weak and limp," he falsely claimed that "establishment of a Palestinian state that will jeopardize our existence (sic)."

He'll "come back… to fix damage"by the new government, he vowed, adding:

"(H)ow can you give confidence to (Bennett) who defrauded his voters (sic), a fraud that has never been seen in history of the state throughout all the elections (sic)."

"(H)e'll settle accounts with (Bennett) at the ballot box" — most likely by foul means, his longstanding way of operating.

"I'll…defeat every one of you," he said, referring to new government members, adding:

"(M)ost of the public wants me as prime minister (sic)."

His Likud party consistently got no more than around 25% support.

Most Israelis oppose him.

Out of power but remaining a Knesset member, he vowed to "battle (daily) against this bad, dangerous, left wing government, to topple it…much sooner than you think," he roared.

"We'll be back – and faster than you think."

Reality for long-suffering Palestinians is that Israel's new regime resembles the ousted one.

"He will make sure to express how extreme he is in the government."

"Palestinians have seen dozens of Israeli governments throughout history, right, left, center, as they call it."

"But all of them have been hostile when it comes to the rights of our Palestinian people and they all had hostile policies of expansionism."

"What we need is a serious change in Israeli policies, not in the personalities."

"The situation was very bad before Netanyahu, and as long as Israel insists on its own policies, it will continue to being bad after Netanyahu."

"This is why we oppose this (new) government."

"The end of the Netanyahu era still contains within it built-in systems of racism, extremism, violence &lawlessness + expansionism, annexation & lawlessness."

"His former cohorts will maintain his legacy."

"It's up to the diminished progressive forces to challenge & change this legacy."

Cold hard reality in the Jewish state and Occupied Territories is that Israel's new regime is as hostile to peace, the rule of law and Palestinian rights as the ousted one.