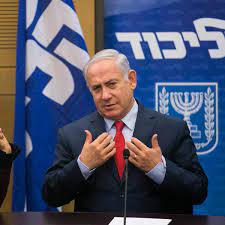 With the end of his tenure fast approaching, Israeli media reported that Netanyahu's aides told war minister/alternate prime minister Benny Gantz that he'll "resign" at the 11th hour so "you'll be PM for three years" — if drop out of the opposition coalition.

Reportedly under terms offered, Netanyahu would switch places with Gantz to serve as alternate prime minister.

Channel 13 reported that he knows his tenure ends Sunday so he'll challenge the incoming government as an opposition party member — while continuing to falsely claim his ouster is from "election fraud."

"All offers were rejected."

In April 2020, Netanyahu's Likud and Gantz's Blue and White agreed to form a coalition government.

It dissolved a few months later because Netanyahu refused to let Gantz succeed him as prime minister — as stipulated in their agreement.

Netanyahu long ago proved he can never be trusted. Virtually everything he agreed to earlier was exclusively self-serving.

On Friday, incoming prime minister Bennett said signed agreements with parties comprising his coalition "brings to an end two and a half years of political crisis" — after four elections failed to achieve a coalition government now agreed on.

Signed agreements reportedly include the following:

A new ministry of diaspora affairs for reform and conservative Judaism will be established.

Two new hospitals will be built — one in the Negev, another in the Galilee.

They'll be a new airport and university in the Galilee.

Improving mental health and other assistance for disabled IDF veterans was agreed on, as well as curbing crime in Arab communities.

Supplemental retirement income will be increased to 70% of the minimum wage.

Both Bennett and Lapid have veto power over cabinet and ministerial committee decisions.

New parties may join the coalition if Bennett and Lapid agree.

Yamina was given control over the national service administration.

The attorney general's office will be split into a head of prosecution and government legal advisor. The move requires cabinet approval.

New Basic Law on legislation will regulate the relationship between the Knesset and the Supreme Court.

A mechanism for repealing laws and basic laws by the court will be included.

Funding will be provided for Israeli-controlled Area C Palestinian construction.

Marijuana use will be decriminalized.

Labor party members will have six minister or deputy minister positions. At least two of its ministers will be cabinet members.

The Kaminitz Law to destroy so-called illegal Arab construction will be frozen through 2024.

Within four months of assuming power, the incoming government agreed to amend the law.

At the same time, each coalition party has veto power over proposed changes, virtually assuring nothing positive for Israeli Arabs.

Supervision of police will be transferred from interior to the public security committee.

Around $16 billion in funding was agreed on for Arab communities.

What's agreed on may or may not be implemented when the incoming government ends Netanyahu's tenure Sunday.