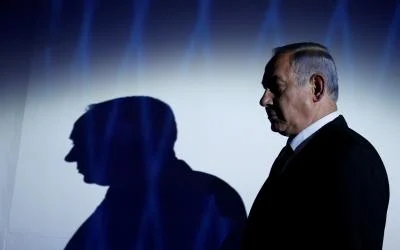 On Sunday Netanyahu's tenure ends, Israeli apartheid tyranny will remain in power under new management — like always before in Jewish state history.

Ahead of a Friday evening deadline, a penultimate hurdle passed when all opposition parties submitted required signed coalition agreements to the Knesset secretary.

At this time, a final one is Sunday's Knesset swearing-in ceremony to officially replace the Netanyahu regime with a new one.

At the same time, things are never over when they're over as long as he's around.

He's not leaving quietly and when disempowered won't operate as a loyal to the country opposition.

"They are uprooting the good (sic) and replacing it with the bad and dangerous," he roared.

"I fear for the destiny of the nation (sic)."

His inflammatory rhetoric has been around at least since the 1990s.

Delusions of grandeur define his self-crafted persona, falsely claiming he alone can lead the Jewish state at a time of invented barbarians at the gates.

Since becoming Israeli prime minister for the second time in early 2009 and remaining in office for 12 straight years, he's on the cusp of being dethroned for being unable to form a majority coalition government after four elections since 2019 — a sign of weakness overtaking diminished strength.

When out of power, "(w)e're going to see a very assertive and aggressive head of the opposition, meaning Netanyahu, determined to make sure that this coalition of change would be a short-lived one and that we will have another election as soon as possible," adding:

"We don't have even a memory of what normal politics looks like."

On Thursday, the Times of Israel reported that members of Netanyahu's inner circle know that although his time is up, he'll combat the new government to "bring it down."

Peaceful transition of power and respect for the rule of law was never his style, notably not after reigning as King Bibi for 12 straight years.

It's unclear if he'll attend Sunday's swearing in session and traditional handover of power on Monday.

On Friday, Ynet News noted even though a new government is set to replace him Sunday, he's "not relenting for a second…"

He "sen(t) his messengers and sycophants to lash out at his opponents and continue nurturing the toxic discourse he has created."

You're either with him or against Israel, according to his mindset.

Because of his extremist rhetoric and toxic environment he created, many opposition coalition members require security for protection of themselves and family members.

In or out of power, he represents an unparalleled internal threat to political forces against him.

The harm he caused since taking power left permanent scars, defenseless Palestinians bearing the brunt of his viciousness.

It "should have set off an earthquake in the Israel Prison Service, police and the State Prosecutor's Office."

It showed dozens of Palestinian prisoners thrown to a concrete floor.

Shackled with their hands behind their back, guards beat them repeatedly with metal batons and by kicking.

Ordered not to move or speak, their ordeal continued for hours — the incident filmed by security cameras.

According to an unnamed prison official, it was one of the most violent unprovoked incidents ever inside an Israeli prison.

Only four guards were questioned briefly about what happened in March 2019, video of it now emerging for the first time.

It showed no rioting or other provocations.

About 15 Palestinian prisoners required hospitalization, at least two in serious condition from what happened at the time.

Recounting the incident, one affected Palestinian said the following:

"They put us in restraints and no one resisted, and then they simply began to beat us with (metal) batons," adding:

"They tossed us into the center of the wing like we were nothing, and beat us without us being able to defend ourselves."

Despite prisoners knowing the guards and seeing them daily, "(t)hat didn't keep them from beating us mercilessly."

"We were sure they were going to kill us."

"Everyone prayed to God. Only after seeing all the blood around me did one of the officers order that I be taken to the clinic."

"They beat me along the way, too."

Restrained in pairs after beatings, they stayed that way overnight.

Stripped and not given mattresses, they were kept this way for three days "without anything."

Told to keep heads down, "anyone who raised his head gotten beaten."

Few attempts were made to identify additional officers present that night."

"Although the prisoners declared they could identify the perpetrators, no lineup was conducted."

After closure of the case with no accountability, the Hamoked human rights group appealed to Israel's attorney general, saying:

"The incident at Ketziont is a case of brute, wholesale violence against tied, helpless people," adding:

"The investigative authorities' attempt to shirk responsibility, despite the security camera footage, is a badge of shame for the national unit for investigating corrections officers and investigative bodies in general."

"When that's the reality, it's no wonder that the violence of security forces toward Palestinians is so common when that's how they handle complaints."

In apartheid Israel, Jews alone have rights, Palestinians none, least of all thousands imprisoned for political reasons.

Considered nonpersons, they're vulnerable to crimes against humanity inflicted on them at the whim of Jewish state authorities and their lackeys.

When transition of power takes place Sunday, not a thing will change.

It never does for Palestinians in apartheid Israel.