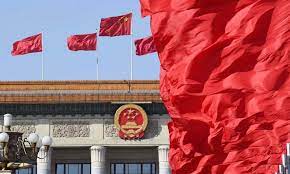 The new measure is all about countering US/Western use of weaponized sanctions to wage war on China by other means.

It provides a legal foundation for countering US/Western war on China by other means.

Measures authorized include denial of visas that permit entry into the country, deporting targeted individuals, freezing or seizing property, as well as restricting or denying permission to conduct various transactions.

"China will not give up its legitimate interests."

"(N)o one should have any illusion of letting China swallow the bitter fruit that harms our own interests."

It "provides a strong legal basis and support for China to counteract foreign discriminatory measures."

Its adoption is notably in response to illegal US, EU, UK, and Canadian sanctions on issues related to Hong Kong and phony accusations of human rights abuses against Jinjiang Uyghur Muslims.

Law Professor Tian Feilong said discussions began about drafting the measure in response to hostile US actions during Trump's tenure.

No action was taken to see if Biden might go another way.

When the US Senate's Foreign Relations Committee backed the hostile to China Innovation and Competition Act of 2021 last April, a draft of the Anti-Foreign Sanctions Law was finalized ahead of its subsequent adoption — based on "Biden's China policies," Tian explained.

Supporting the legislation, he quoted a Chinese saying that goes:

"Offend no one if none offends you, but retaliate if you are under attack."

Beijing established a mechanism for responding to foreign sanctions.

China's Foreign Ministry, its State Council, and other bodies are empowered to prepare countermeasures in response to hostile foreign actions.

Hong Kong's chief executive Carrie Lam said the new law gives the US and West "a taste of their own medicine."

"The law precisely and effectively targets those who have taken unilateral sanctions in hurting China's interests, and this targeted group can be expanded to their relatives or organizations, which would have strong deterrent effect."

Huo, Tian, and other Chinese legal experts believe the first of its kind law will effectively support the country, its entities and citizens against hostile actions by foreign countries — notably US-dominated Western ones.

It shows that when China's sovereignty, security, development, and other issues are damaged, it will retaliate appropriately.

The Anti-Foreign Sanctions Law provides a "complete legal basis, offering (China) the same position as the West in taking countermeasures."

It makes them more systematic, scientific and powerful, he stressed.

Spokesperson for China's Legislative Affairs Commission of the NPC Standing Committee said the new measure will have no adverse impact on the country's economic development.

Because of China's prominence on the world stage free from US control, chances of achieving this aim are virtually nil.